2 2021 Skoda Rapid Revealed in Russia, Looks Like a Scala Sedan

3 In Russia, They Put Out Flaming BMWs With Actual Human Waste

4 World's Cheapest EV Is Russian and It Launches in 2020

All Hail the Mighty SUV

This is car-shaming taken to the extreme: a Russian vlogger is making the international news for a stunt that few others would carry out, paying to have his car dropped from a helicopter from about 1,000 feet.
9 photos

The man in question claims that he’s had his Mercedes-AMG G63 for 2 years, after saving up to buy because it was his dream car. However, the experience has been anything but a dream: the car would be in the shop on a monthly basis and, on many of these occasions, the dealer refused to pay for stuff included in the warranty.

To make a long story short, the dude claims he decided to smash his car by dropping it from high up because he’s fed up with it. He says he’s had issues getting the job done because no one would help him destroy that which is rightfully his.

A couple of days ago, he found the right people. He and his team rented a helicopter at an airport in Petrozavodsk (Karelia), strapped the G63 to it and dropped it from high up. At the end, they posed for pictures on top of the now-unrecognizable pile of metal and glass.

Of course, there’s a catch to this story. The dude is vlogger Igor Moroz from Moscow, who’s apparently famous for his pranks. He’s also lying about his bad experience with the G63 or, at the very least, about how this was the reason for deciding to have it smashed. After the deed, he announced a raffle for his followers, where he would choose 5 winners for whom he’d buy 5 new cars of their choosing. Prior to that, he had said he would award them $1,000 each.

Then, Kolesa reports that someone from the airport confirmed that Moroz and a business partner arrived on site to rent the helicopter, and were talking about a bet Moroz had lost, in which he vouched he’d drop his car from a helicopter. This stunt would make Moroz a man of his word, we guess.

All elaborate theories aside, this is most likely just a PR stunt – and not even an expensive one. Reports online say Moroz must have had the powertrain removed and sold for parts, which, added to the monetization of clicks, would cover the expense of the stunt and maybe even earn him a buck or two. In addition to all this media attention, which is priceless. 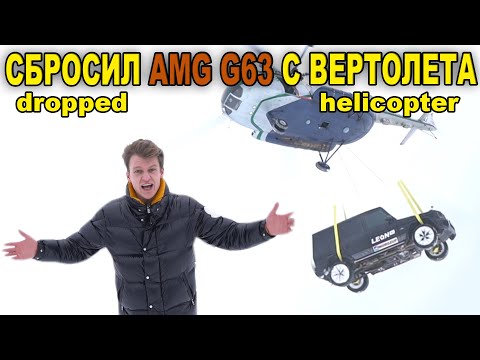