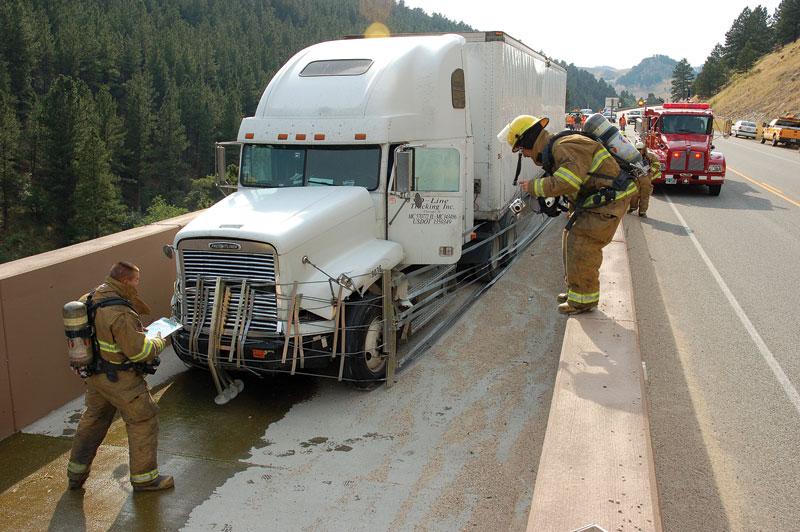 When people think of weapons and destruction, the first thing that comes to mind is usually a bullet, because, despite its neglectable mass, it has such a high kinetic energy (thanks to its traveling speed). But what if we use the reverse combination? a non-important speed, but a hefty mass. This dangerous cocktail might be closer to you than you think, as it can be easily represented by a truck which had gone out of control on a slope, due to a brake failure, and is coming your way on or off-road.

40 years ago, engineers developed a solution to this problem, creating the runaway truck ramp, or truck arrester bed. These are traffic devices which allow drivers to stop their vehicles even if their brakes are no longer in service. They can also be used by other categories of vehicles, such as school buses, for example. The device is usually built as a long lane constructed adjacent to a road with a steep grade that uses sand, gravel or other aggregate materials that oppose resistance and eventually stop the runaway vehicles. The most common places for such a feature to be installed are mountain areas, suburbs and generally roads that have long descending grades. The devices can also be found in places that require a vehicle to come to a full stop, such as an intersection.

The ramps are designed in such a way that they cause little damage to the vehicles that use them, especially when compared to the one resulted from a crash. The heavy vehicle loses its speed due to the drag caused by its sinking into the bed material. 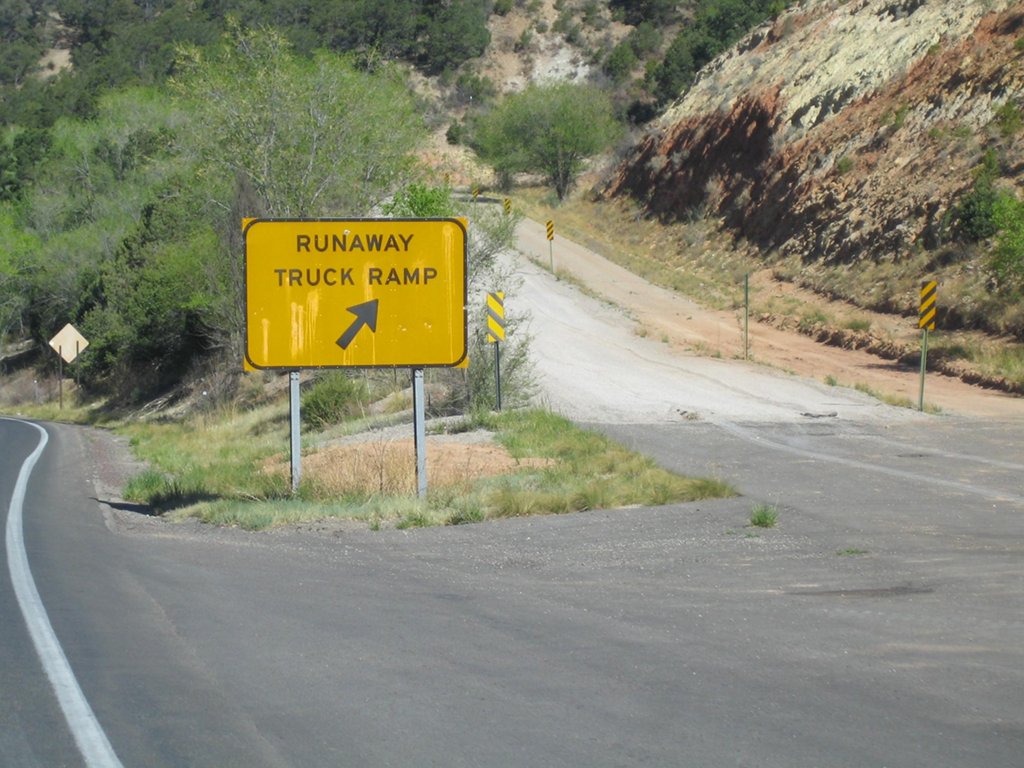 Depending on the material or forces used to stop the vehicle, there are four types of truck arresters:

- Gravity escape ramp: some devices use a long upward design, in order to also use the gravity’s effect to decelerate the vehicle.

- Arrester material ramp: this is a gravel-filled device that uses multiple types of gravels (depending on the expected vehicle entry speed and weather conditions) to safely stop the
vehicles. Numerous research sessions have shown that rounded gravel, collected from riverbeds, is more effective than crushed gravel.

- Sand pile escape ramp: this type of device uses a shorter length and relies on sand to bring the vehicles to a halt. The type has two main disadvantages: first of all, the sand provides a high deceleration level, which can lead to vehicle damage and driver injury and secondly the sand can be altered by weather conditions, changing its properties and becoming inappropriate for a safe use.

- Arresting barrier: A series of cable nets are stretched across the ramp. These use energy absorbers mounted on both sides of the ramp’s walls. This is the most modern type of truck escape ramp. 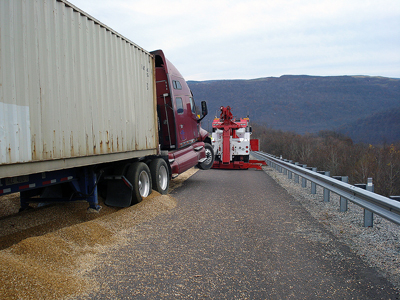 For such a ramp to be safe, it must meet a series of conditions that would allow a driver to bring the vehicle to a halt with minimum damage:

- The length of the road device must be sufficient to dissipate the kinetic energy of the heavy vehicle.

- The ramp should be properly sized, in order to accommodate more than one vehicle at once.

- The lane’s alignment should be tangent (if possible), so that the driver does not have to turn the vehicle in order to enter it, a process which might generate additional unwanted       movement.

- The entrance section must be designed so that it does not cause vertical movement to the vehicle.

- The ramp’s presence must be signaled properly, allowing the driver to calculate the maneuvers necessary to enter the device.


There is no international legislation that stipulates where runaway truck ramps must be built, so these safety devices are usually installed after a traffic safety authority recommends it. Sometimes, special ramps are installed as a result of a community’s lobbying. 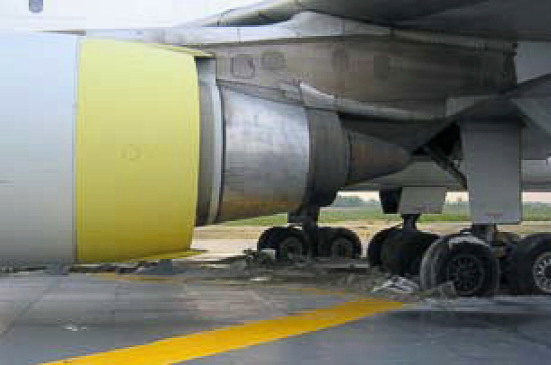 Modern truck arrester beds are also fitted with post-stop facilities that allow the vehicle to be place back on the road and keep the traffic safe. These include emergency roadside phones, raised power lines that allow lifting cranes to operate, work spaces dedicated to vehicle removal and warning signs for sites that can be affected by gravel spills.

The truck escape ramps have even generated a “transport myth”: It is said that some truckers that lose control of their vehicles choose not to use the safety devices, as they consider that the action would indicate their lack of skill behind the wheel.

As these devices save lives and spare material damage, their use is not limited to road transport: the solution is also encountered in the aviation industry, where engineer materials arresting systems are successfully used on airports. These are beds of lightweight, crushable concrete, built at the end of runways.