2 911 Call: Runaway Toyota Prius
Up Next 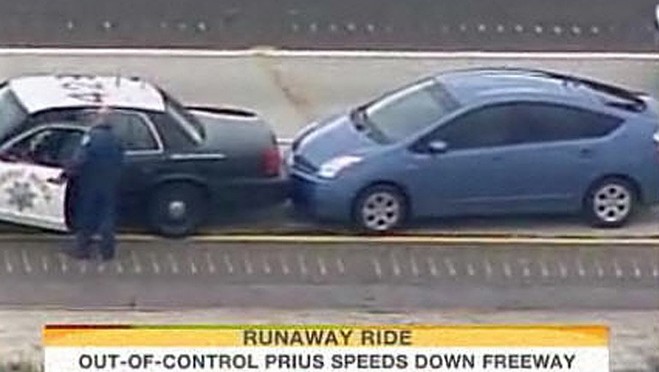 Believe it or not, the media storm expected to hit Toyota, after last week a new 911 desperate call for help involving a runaway Prius surfaced, has backfired on the carmaker's detractors, as more and more more question regarding the validity of the event start being asked.

As you remember, on March 8, James Sikes, owner of a Toyota Prius, made a frantic 911 call, claiming his Prius is experiencing unintended acceleration and reached 94 mph. It took the swift intervention of the police to stop the car, apparently pulling in front of the Prius and applying the brakes.

Last Thursday, investigators took the Prius for a spin, trying to recreate the event. According to MSNBC, "National Highway Traffic Safety Administration and Toyota technicians could not duplicate the sudden, unintended acceleration," experinced by James Sikes.

According to Craig Hoff, professor of mechanical engineering at Kettering University, for the incident to have really occurred, at least two systems (the sensor signal that tracks the brake and gas pedal positions and the hybrid control computers) had to fail at the same time

"In this case, knowing that we are able to push the car around the shop, it does not appear to be feasibly possible, both electronically and mechanically that his gas pedal was stuck to the floor and he was slamming on the brake at the same time," the report filed for the House Committee on Oversight and Government Reform reads.

"We're not saying Mr. Sikes is wrong or that he lied, we're saying that questions have arisen in the investigation," Kurt Bardella, spokesman for Darrell Issa of California, the top Republican in the committee told MSNBC.

The California Highway Patrol (CHP) on the other hand says it stays by its initial findings that the event is no hoax. Since no injuries or damages to property have resulted from the incident, CHP says the case is closed.

"Unless they can completely disprove Mr. Sikes, we're done," Brian Pennings, CHP spokewsman said. "It doesn't sound like they can do that."