3 U.S Navy’s EA-18G Growler About to Get Even Better at Electronic Warfare

NavyX is an organization of the British Royal Navy that describes itself as an "Autonomy and Lethality Accelerator." That would be a division of sorts tasked with the development and testing of new and advanced hardware that the nation’s armed forces can use. And the group’s latest toy is called Madfox.
5 photos

Madfox is kind of short for Maritime Demonstrator For Operational eXperimentation. It is based on a ship called Mast-13 and developed by aerospace and defense company L3Harris. It moves over in possession of NavyX after spending one and a half years with the Defence Science and Technology Laboratory (Dstl).

The autonomous ship is 13-meter (41-foot) long, and depending on the outcome of the testing to be conducted over the next year, it could be used for anything from surveillance to a more active, protection role.

The exact details of Madfox are, of course, not public, but what is known is that the vessel could be capable of receiving remote instructions or operating on its own accord.

“With Madfox now directly in the hands of NavyX, the team will be able to explore a multitude of issues such as safety, regulatory compliance, new missions, new payloads and the role that a USV can play in complex operations and within the future fleet,” said in a statement Commander Antony Crabb, NavyX team leader.

Separately, NavyX also expects to begin testing something it calls Rigid Inflatable Boat (RIB). The name is, of course, self-explanatory, but what it does not reveal is that these water-bound machines will be autonomous as well.

According to the organization, RIBs will be tested to see how they can be integrated and used from future Type 26 and Type 31 class frigates. These too are expected to enter service with the Navy by the end of the current decade. 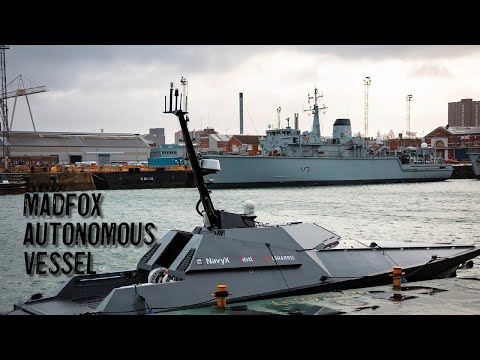