2 Royal Caribbean's Navigator of the Seas Returns to L.A. With $110M Worth of Upgrades

5 Royal Caribbean's Ultimate World Cruise Is the Longest One Ever, Will Last 274 Nights
Car video reviews:
Up Next

Royal Caribbean's Newest Cruise Ship Was Finally Delivered, It Is the World's Largest

After 30 months of waiting, Royal Caribbean International finally took delivery of what it calls the most innovative cruise ship in its lineup. The Wonder of the Seas will make its official debut this spring.
6 photos

To mark its completion, Royal Caribbean held a traditional ceremony in Marseille, France, along with shipyard partner Chantiers de l’Atlantique.

As explained by Michael Bayley, Royal Caribbean International CEO, the delivery of the ship is the culmination of 30 months of partnership across more than 2,000 crew members and workers. The vessel’s combination of new features aims to offer passengers a one-of-a-kind cruising experience, whether it is in terms of entertaining, nightlife, or dining.

Guests will be able to create some of their favorite memories onboard the Wonder, as there’s no time to get bored. A new Mason Jar Southern Restaurant & Bar will attend to their culinary needs and cravings, happy hours can be spent at the Vue Bar, and there are also grab-and-go spots on the ship such as El Loco Fresh and Cantina Fresca, full of Mexican delights.

Other notable amenities are the Wonder Playscape, an underwater-themed play area for kids, the FloRider surf simulator, rock-climbing walls, and the Central Park, with over 20,000 plants.

The Wonder of the Seas will make its debut on March 4, in Fort Lauderdale, Florida. It will offer cruises to the Caribbean between March and April, it will sail from Barcelona and Rome starting in May, and will also offer cruises in the Western Mediterranean. 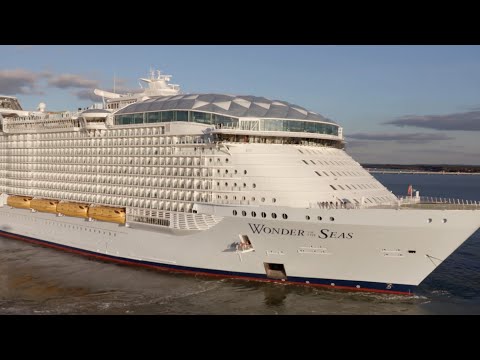