Announced a few months back, Royal Caribbean’s upcoming ship, Utopia of the Seas, has reached its first major milestone, with the keel-laying ceremony for it being held recently in France.
6 photos

Utopia of the Seas will be the sixth vessel in Royal Caribbean's Oasis-class and the first in its category to be powered by LNG (liquefied natural gas). The ship will be built in Saint-Nazaire, France, with the steel-cutting ceremony taking place back in April in the Chantiers de l'Atlantique shipyard, one of the largest in the world.

A few days ago, Royal Caribbean celebrated the official start of Utopia's physical construction, a lengthy process that's going to last 30 months and involve hundreds of designers, engineers, and workers. Honoring tradition, newly minted coins were placed on the first 948-ton steel block of the vessel to bring luck both during the construction process, and every time the Utopia of the Seas will be on the water.

While the ship will be the first LNG-powered one in Royal Caribbean’s Oasis-class, it will be the second one in the cruise line operator’s lineup to use liquefied gas, next to the Icon of the Seas, which is set to debut in the fall of 2023. Back in October, Royal Caribbean announced its Destination Net Zero plan, which is the company’s goal of achieving net-zero emissions by 2050. To that end, Royal Caribbean is working on modernizing its fleet by building more environmentally friendly ships, investing in energy-efficient programs, and developing alternative fuel and power solutions.

We know little about Utopia of the Seas so far, but with this being an Oasis-class ship, we can expect it to be a mammoth of a watercraft, as Royal Caribbean boasts of the vessels in this class being the world’s largest cruise ships. They span over 16 decks and have their own distinct neighborhoods, offering 20 restaurants and a huge variety of attractions for guests of all ages. The Oasis class ships can accommodate more than 5,400 passengers.

Utopia of the Seas is scheduled for completion in the spring of 2024. 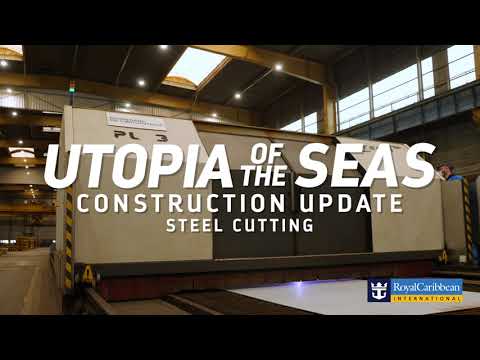