Royal Caribbean’s cruise terminal in Galveston, Texas, is coming close to completion, and there’s fresh footage to prove it. The terminal will feature state-of-the-art technology and will be equipped to welcome some of the largest cruise ships in the world.
6 photos

Royal Caribbean signed the agreement for the cruise terminal back in 2019, with its partner being the Port of Galveston, which is the fourth most active cruise port in North America, according to the cruise company. The $125 million structure has 170,000 sq ft (15,793 sq m) and is located in the eastern section of the port, also referred to as Pier 10.

Initially scheduled to open in the fall of 2021, the cruise terminal is still in the works due to delays and complications caused by the pandemics. However, Royal Caribbean has reached the final stages of the construction and the terminal should open its doors this November, with the first ship to be received being Allure of the Seas.

The vessel is part of Royal Caribbean’s Oasis-class, which includes the largest passenger ships in service. Launched in 2009, the watercraft was the world’s largest passenger ship (measuring 1,187 ft/362 m in length) until 2015, when Harmony of the Seas took its place, with the latter boasting a length of 1,188 ft (362.12 meters).

Back to Royal Caribbean’s cruise terminal in Texas, it boasts features such as facial recognition and mobile check-in and includes a staging and loading area, bus and taxi staging areas, and very large parking. The terminal will help attract more visitors to the island and will contribute to the economic growth in the region by also generating new jobs. According to Michael Bayley, Royal Caribbean CEO, the world-class facility will increase the number of guests in the region by 50 percent, generating a $100 million economic impact within the first year of operation alone.

You can see a timeline of the terminal’s building process in the video below. 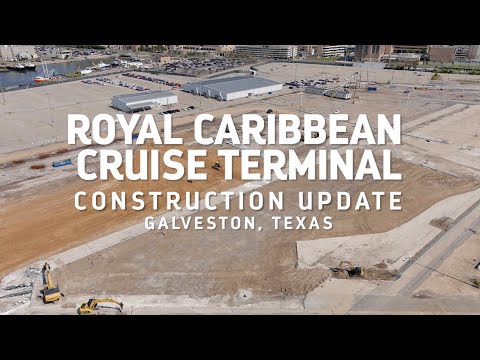