We are sure those with a passion for the automotive world can tell us, by heart and at a moment's notice, at least five people who in time have become somewhat of road legends. If, however, we ask them to name at least three legend roads, we are sure most of them will have a difficult time finding the appropriate answers. The reason for that is very simple: there is only one legend road. The American Route 66 (also known as The Mother Road, the Will Rogers Highway, the Main Street of America and God knows how many other names) is just about the single road out there which can come close to the title of legend road. Sure, the Europeans have the German Autobahn, but you can't just simply compare the last refuge of the high-speed drivers with the stretch of road linking East to the West, across the American midwest. Why? Find out below. BEGINNING 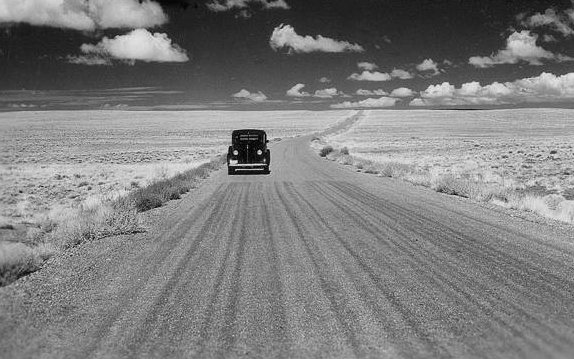 The story of the road which will become synonymous with "living life on the road," in a mostly desertified surrounding, begins a bit late, compared to the advent of the automobile. By 1926, the year when the road was first commissioned, cars had been around for nearly three decades. A road to link East to West was no longer forward-thinking, but a necessity of the respective era.

As we said, the first reference to what is now known as the Route 66 was made back in 1926, despite the fact that legislation concerning public highways had been around ever since 1916. The revision of this act in 1925 made room for the creation of the government plan for national highway construction.

As part of that plan, a road from East to West, linking Chicago to Los Angeles, was given the designation 66. It stretched for 2,448 miles (3,940 km), right through the heart of the US. What made this road special, however, was the fact that, unlike other roads like the Lincoln (the first US highway, established in 1913 and linking New York to San Francisco) or the Dixie (Chicago to Miami), the 66 was specifically conceived not to have a linear path, but a diagonal one.

This minor and apparent insignificant detail made the 66 connect countless rural communities in Illinois, Missouri, and Kansas to both sides of the US. As you might guess, this allowed for local trade to flourish. By the 1930s, the 66 even rivaled the railroads in terms of shipping, mostly because truckers loved the better weather on the 66, compared to the one found on Northern roads. THE GRAPES OF WRATH 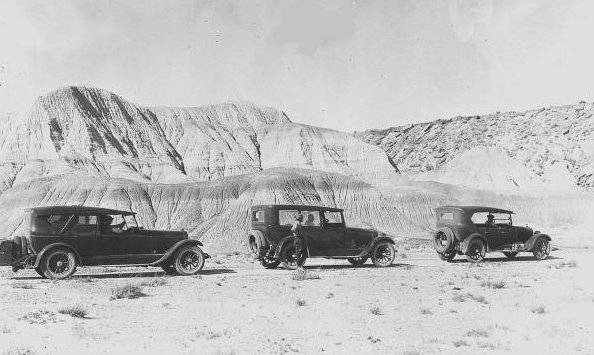 Of course, liked by truckers as it was, the 66 was hardly imprinted in the public consciousness. Something had to happen to make the road as notorious as it is today. Those events that led to 66's notoriety began unfolding in the early 1930s. In a ten year time frame, the Great Depression struck, a series of devastating sand storms began ravishing the Plains and eventually, the Second World War broke out.

During the Plains' sand storms, people already severely struck by the world crisis found themselves stuck in between the proverbial rock and the very hard place. The little they had left after the recession took everything away, slowly began disappearing into the jaws of Nature, leaving residents in Oklahoma, Arkansas, Missouri, Iowa, Nebraska, Kansas, Texas, Colorado and New Mexico with nothing else to do but leave their homes and try making a better life for themselves West.

The 66 became the only route of escape for some 210,000 people who fled to California in the early stages of what came to be known as the Dust Bowl. By 1940, the migration would become the biggest exodus in the history of the US, with some 2.5 million people moving to the respective state. 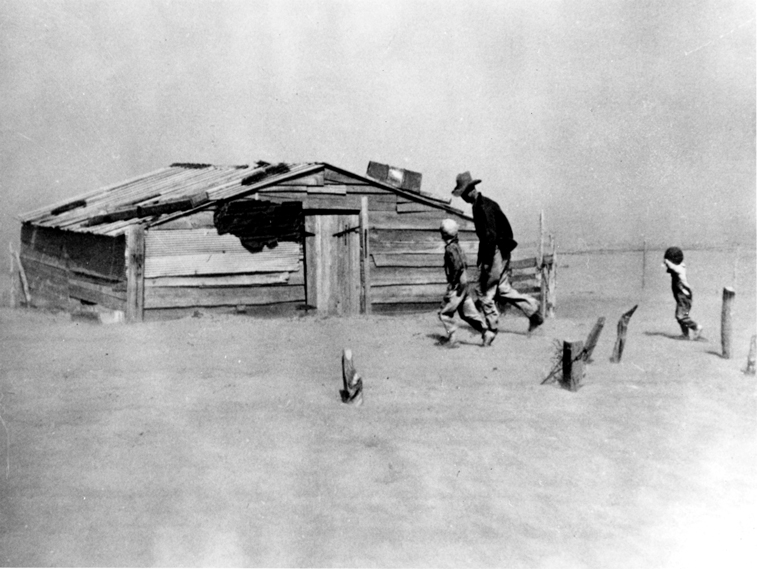 The struggles they had to face inspired artists, writers, movie producers and so on in creating their own interpretations of what happened in the 1930-1940 timeframe. Just like the stories of the US settlers, the exodus in the Dirty Thirties gained momentum and soon the whole country learned about them and the 66.

The term Mother Road, given to the famous route by John Steinbeck in his The Grapes of Wrath was quickly adopted by the American public. The novel, describing the struggles of the Joads and the challenges they had to face while on route to California, was the quintessential element needed to boost the road into the public's hearts.

The dramatic events of that time would make the 66 be seen as the "road to opportunity." Thanks to the massive traffic and the involvement of countless people from nearly every state transited by the road, the 66 was declared "continuously paved" in 1938. Until then, the road was mostly gravel or graded dirt. The pavement came just in time for the Second World War.DOING ITS PART
Route 66 became of particular importance for the US during the years of the Second World War. Very soon, the road became the main artery for US recruits to arrive at Western military bases. Given the somewhat precarious "continuous pavement" of the road, the US Army had to invest some $70 billion in upgrading the road and constructing additional infrastructure. The increased traffic created some of the first road side businesses along Route 66.THE GOLDEN YEARS 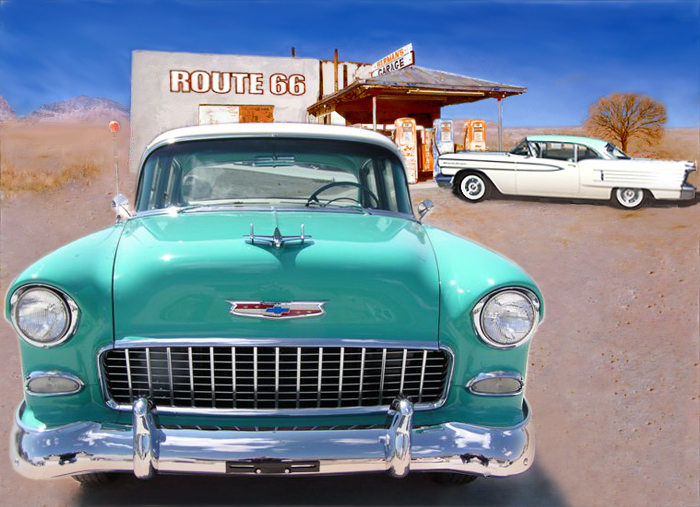 As with just about every aspect of human life following the end of the war, Route 66 began flourishing from 1946 onwards. Having helped bring together one of the biggest army the world has ever seen, Route 66 stuck in the minds of the recruits from Northern states. As the war ended, they returned to the places where they had trained in.

Combined with the increased mobility of the population and the newly found appeal for tourism, small business owners along the Route realized the potential and decided expanding their business to offer food, maintenance, fuel and shelter.

This need to offer more would evolve into a Route 66-specific roadside architecture, with small cottages, cabin camps, or motor courts and tourist homes making for a unique feel of the road.

The uniqueness of the road and everything that surrounds it made Hollywood turn its eyes towards East and give the 66 its very own show in the 1960s. Prior to that, the famous "get your kicks on Route 66" catch phrase was ushered by Robert William Troup, Jr. and made notorious by Nat King Cole in 1946.DOWNFALL 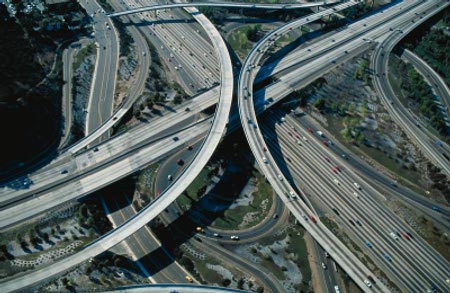 As fate often has it, it was exactly the success and popularity of the Route, especially among tourists, which eventually led to its downfall. The high intensity military traffic on the 66 during the war had already taken its toll on the running surface. In addition, the growing automotive industry made the number of cars on the road soar in the 1950s, and the need for upgrading the road became even more stringent.

Still, the man who sealed its fate was Dwight D. Eisenhower, who had returned from Germany with a lasting impression of Hitler's Autobahn:

"I saw the superlative system of German national highways crossing that country and offering the possibility, often lacking in the United States, to drive with speed and safety at the same time," he said about the German roads

As a consequence, he passed the Federal Aid Highway Act of 1956, a piece of legislation which called for the creation or recreation of a nationwide highway system. This highway system would put an end to the historic Route 66 and create an overpassing four-lane highway. As you might guess, there are not many of those who choose the 66 over the highway... 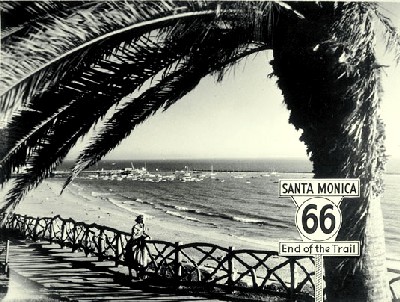 Some portions of the original road, like the Veterans Parkway, located east and south of Normal and Bloomington, in Illinois, still exist. Nearly every state along Route 66 has some type of active preservation or historic foundations and museums which lobby for the 66 and its survival or simply tell its story.

As the road celebrates its 83rd anniversary in 2009, the Mother Road received a new Western Terminus in Early November 2009. The highway's original end point in 1926 7th Street and Broadway in downtown Los Angeles, is now situated at the Santa Monica Pier. Even more, Route 66 was listed on the 2008 World Monuments Watch, in an attempt to preserve both the economic activities which depend on it and the "tapestry of 20th-century Americana."

"The vast stretch of landscape that comprises Route 66 tells a story of America that is still unfolding. Preserving Route 66 is not simply about nostalgia, it is about valuing heritage as an important tool for education, community building, and sustainable development. Through collective action and shared stewardship, the highway from the past still holds a bright future," the World Momuments Fund says about Route 66.