2 The Ursa Tiny Home Is Completely Self-Sufficient, Quite a Stunner

3 Nomad Tiny House on Wheels Is Easily Towable, Made for All-Season Off Grid Adventures

Rotating House by Self-Taught Inventor Is Awesome, a Testament of Love

Love can move mountains, they say. Love will also turn a man with no college degree or proper experience into an inventor, engineer, and architect – and the builder of one of the most unique private residences ever.
6 photos

This is not a tiny house, but it is mobile. Instead of being able to roam from location to location on a towable trailer, this house sits on a platform that allows it to make full rotations, so views change as often and as quickly as residents desire it. It’s the work of Vojin Kusic, a 72-year-old man from Bosnia, who built it as a means to prevent his wife from complaining.

Kusic is a true legend back home, in the small town of Srbac, and it’s due to his incredible home. Speaking to Reuters just recently, he says the first home he built for himself and the wife failed in one major respect: it did not allow the wife, Ljubica, to see who was coming up to it on the road. So he did extensive remodeling, tearing down walls and rewiring stuff to change rooms, and have the living facing the road.

When the youngest child moved in with his family upstairs, Kusic understood he was in for more remodeling of the old house. Anticipating new demands from Ljubica, he promised her a new house that she could spin whichever way she wanted.

Six years later, the rotating house is almost completed, as you can see in the video below. Kusic cites as inspiration for it the works of Nikola Tesla and Mihajlo Pupin.

The house sits on a platform that spins around a 7-meter (23-foot) axis using electric motors and wheels from an old military transport vehicle, he says for the media outlet. He built it by himself, from the design stage to the actual construction. Speed is adjustable, too: Kusic says the house can be set to make a full rotation in 24 hours, or as fast as 22 seconds, though the latter would arguably cause serious dizziness.

“This is not an innovation, it only requires will and knowledge, and I had enough time and knowledge,” Kusic explains. He jokes that he only took one break from the project, when he was hospitalized for a heart issue, and while in hospital, he asked doctors to help him live longer to finish it because no one would have been able to. 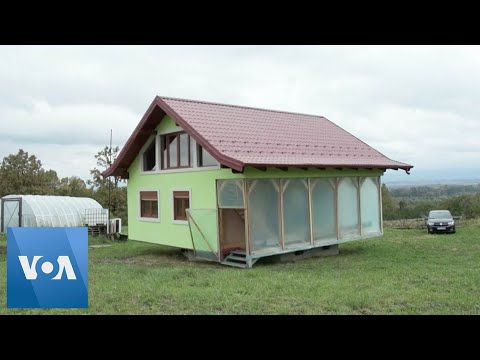