4 Kia Partners Up with YouTube again for 2015 Music Awards

5 Chris Harris Selling Some of His Toys to Fund Videos
Car video reviews:
Up Next

Roman Atwood likes two things: pranks and tricking police. When his grandmother turned 78-years-old recently, the famous YouTuber decided to use them both to pull a prank on his beloved. Things got quite serious at some point, with the “victim” getting arrested. It turns out he felt sorry about his little joke considering he bought her a Chrysler 200 after.
1 photo
Every you and I would most likely buy a cake, organize a trip to Europe or just purchase a unique painting. But when it comes to a guy that makes money out of YouTube pranks, it had to be something different with his grandmother. After all, the best joys in life come when you combine pleasure with work.

Sure, there wasn’t much pleasure on the poor lady’s behalf, considering she had the shivers. It so happens the two were driving around in Atwood’s Nissan GT-R when they parked the car and switched seats. It’s then when the 28-year-old YouTuber made her believe the police car stopping next to them were real.

The prank ended with Atwood’s grandma getting handcuffed for driving an alleged stolen vehicle. Naturally, one of the rights the cops were reading as they would mime the arrest was, in fact, the birthday cake. So that’s how everything ends in the video, but as you can hear the woman saying, she took quite a big scare off the prank.

Whether or not it was part of the plan, Roman later gifted her a brand new car. According to his post on Instagram, he fully paid for the blue Chrysler 200, so it's safe to assume he kind of felt bad about his prank after all. 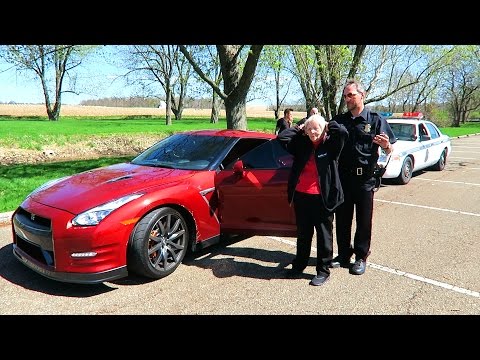