Cosmin Vasile
It’s been a bit more than a month since developer Psyonix debuted the second season in Sideswipe, the Rocket League mobile spinoff that made it to iOS and Android late last year, and the studio has just announced a brand-new season is now available to mobile gamers.
6 photos

The Threes Mode is always played on the new Longfield Arena with the addition of offscreen indicators for players to keep track of their teammates. Also, as the name suggests, the new Spectator Mode allows players to watch and analyze Private Matches.

Of course, all Season 2 rewards, such as Player Banners and Titles, will be offered following Season 3’s launch for the highest rank the player achieved during the season.

As far as the new season’s Rocket Pass goes, Psyonix announced it will introduce three cars to the game’s roster: Marauder, Mantis, and Takumi. Among this season’s rewards, the studio revealed the Yoked1K Wheels and the Lv 50 Force Razor Goal Explosion. And for players who are out of SP, the new season brings new Season Challenges to keep your wallet and Garage fully stocked.

Rocket League Sideswipe is a free-to-play mobile game that brings the original game’s formula to smaller screens. It makes it possible for Android and iOS users to get a taste of Rocket League, the game that made the “soccar” genre popular.

The blend of soccer and fast cars is what makes Rocket League unique and fun to play. Not to mention that developer Psyonix is adding new modes to the game all the time to keep it as fresh and exciting as possible. Rocket League Sideswipe is available on iOS and Android for free via the App Store and Google Play Store. 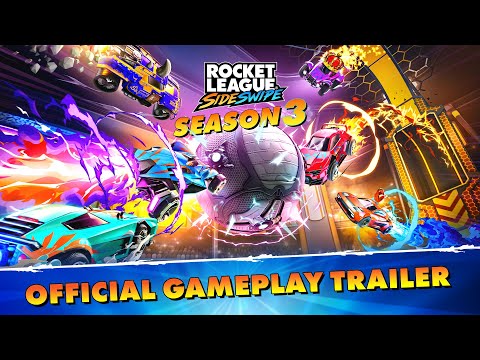