Just last month, when a chess robot broke a kid’s finger during a championship, and shortly after a video of a machine-gun-strapped robot dog doing target practice went viral, people were horrified because, apparently, humanity was doomed and robots were taking over. But how about a cyborg snake that can walk?
10 photos

That is actually a thing, and it was possible courtesy of engineer, popular vlogger and MythBusters: The Search star Allen Pan, self-titled snake lover. In his latest video, Pan, who is also popular for his science series Sufficiently Advanced (SA), decided to correct 150 million of years of what he calls “evolutionary mistakes” by giving snakes their legs back, with help from robotics.

The entire feat is available in the video below, and it’s a must-see even if you’re not into natural sciences or robotics. One of the reasons Pan is so popular is his ability to deliver entertaining content, and this quest of his is no different. Speaking of quest, it focused on two things: to prove that he was the biggest snake lover in the world, and to prove that he was God. Or the closest thing to God.

Saying that he felt bad for snakes because “they lost their legs and nobody is even trying to find them,” Pan set out to create a robotic exoskeleton that would double as the lost legs (which are actually vestigial because of evolution). Looking at the western three-toed skink (Chalcides striatus), a species of lizard that resembles a snake but has four tiny legs it can walk on, Pan created version 2.0 of the robotic legs. The first one involved spider-like legs, one set at each end of the snake, which he tested on a stuffed toy snake and decided they wouldn’t work.

Version 2.0 consisted of a transparent tube with lizard-inspired legs, a pair at each end. Each leg had a servomotor connected to a controller board, with programmable movement, controlled either via the computer or with a remote. Once the “legs” were printed, Pan had to find someone who would lend him a snake for the final test.

To that end, he stressed the fact that the tube was open on both sides, so the snake could leave anytime it wanted. Moreover, the snake wouldn’t be constrained into position, and could chose to stay inside the tube for the walk or not. Pan met with a snake breeder who presented him with several snakes, and a beautiful female yellow ball python was eventually chosen as the perfect candidate because it was relaxed.

The experiment was a success. The female python was game for a short walk, and then another short walk, on a leash. Even Pan seemed somewhat taken aback by the success of the experiment, declaring that it was proof that snake “wanted” their legs back.

We don’t know about that, but it’s still an instance of useless (yet awesome) engineering that can make snakes walk. 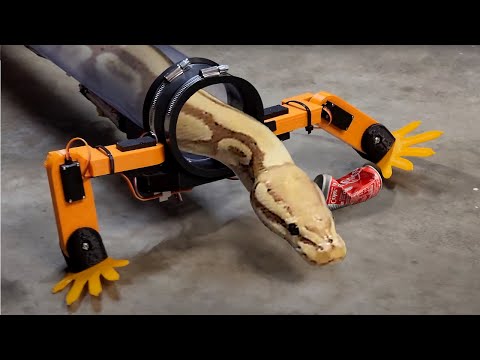