4 World’s Smallest Underwater Scooter Ready to Make Waves, Can Even Charge Your Gadgets

Rockets and space exploration missions are flamboyantly spectacular. Still, there is one environment that poses just as many challenges, if not greater. Ironically, it's all around us. Before going high up in the sky, we should take a deep dive into the underworlds of the planetary ocean.

That is precisely what a research team did recently with the help of a most innovative robot. OceanOneK is probably the world's most sensitive diving robot, with a sensitive haptics feedback system, 3D high-res vision, and precise motion capabilities. The result of over eight years of development, it can submerge and operate to depths of up to one kilometer (0.62 miles). The "K" in its name stands for that, by the way. Developed by Stanford University's Robotics Lab, the robot has achieved unprecedented feats in delicate underwater operations.

In July of this year, the robotic underwater explorer went down to the Italian steamship Le Francesco Crispi wreck about 1,600 ft (500 m) in the Mediterranean Sea. To put it in the words of its creator, Stanford University Professor Oussama Khatib, "You are moving very close to this amazing structure, and something incredible happens when you touch it: You actually feel it. I'd never experienced anything like that in my life. I can say I'm the one who touched the Crispi at 500 m. And I did – I touched it, I felt it."

On April 15th, OceanOneK took its first sea dive 20 miles (32 km) off the coast of France to explore the wreck of La Lune, the flagship of King Louis XIV. The robot recovered – and then returned – a vase from the wreckage of the never-before-explored ship which sunk in 1664.

Many Remote Operated Vehicles (ROVs) can go much deeper, but this humanoid-shaped robot has unprecedented abilities. Not only is it minutely accurate in underwater movements, but it also has a highly developed dexterity, thanks to the touch-like control systems of its hands. The eerie-looking ROV came into reality from an environmental need: studying Red Sea coral reefs too deep for human researchers to reach.

The robot's extraordinary abilities come from its two arm-like attachments, allowing for a broad range of accurate movements. Both "wrists" are fully articulated and fitted with sensors continuously providing feedback to the pilot's controls. The human operator experiences a tactile perception that is very close to touching the object the robotic hands are holding. The haptics is so precise that the pilot can feel if the robot is grasping something solid and heavy or light and delicate.

Five feet (1.5 meters) long from end to end, OceanOneK has stereoscopic vision, thanks to its two front-facing high-resolution cameras placed on the robot's "face." Through high-accuracy engineering, the two fully articulated arms give the machine a field of motion that is very close to a human's. To withstand the extreme forces of deep-sea diving, the robot is built from a special foam made of glass microspheres. These give buoyancy while the ROV operates under tremendous pressures (over 100 times more higher than at sea level) half a mile below the surface (for comparison, most nuclear submarines operate between 1,600 ft to 3,000 ft deep - 500 to 900 m). The robot's arms are fitted with an oil-and-spring mechanism that compresses oil to match the outside pressure, preventing collapse and protecting sensitive electronics.

Eight thrusters are responsible for the delicate deep-sea positioning of this mermaid-looking robot. An array of sensors spread throughout the body continuously monitors currents and turbulences. It automatically activates the thrusters to keep the robot in place. The human resemblances are so close to our bodies that the robot can keep its arms steady even if the body moves, with help from quick-firing motors.

With precise adjustments, the robot keeps a steady hand as it works. Sophisticated algorithms oversee the navigation, which relies on environment perception from both sensors and cameras. The research team made the robot so human-like that if it detects an imminent collision, it can quickly brace for impact with its arms. Much like its human counterparts, the robot can also use hand signals. Thus the pilot can effectively exchange messages with the underwater team when audio comms are unavailable.

Although it is perfectly adapted to working alongside divers, the scuba robot's ultimate goal is to replace human operators in unreachable or hostile environments. "Robotic avatars will search for and acquire materials, build infrastructure, and perform disaster prevention and recovery operations – be it deep in oceans and mines, at mountain tops, or in space." (roboticist Oussama Khatib).

As a commemorative marker of this technological breakthrough, OceanOneK placed a plaque on the Mediterranean seabed that reads:

"A robot's first touch of the deep seafloor
A vast new world for humans to explore." 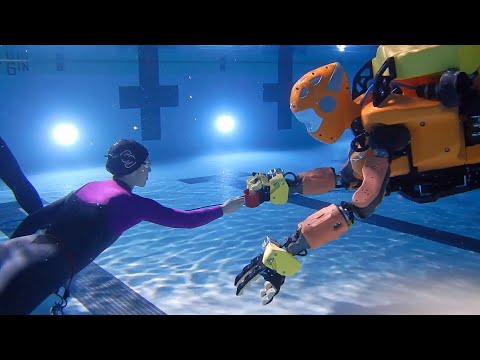 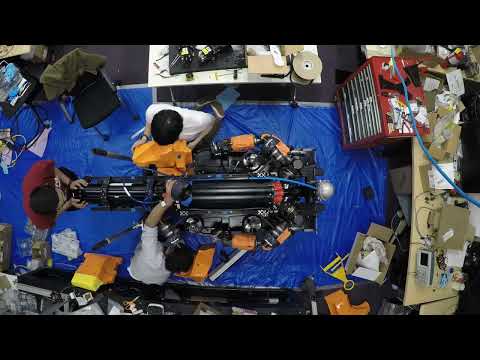