1 The Roborace Car Gets Near-Final Version, Looks Even Better

2 Formula E's Next Season Car Unveiled, Looks a Lot like the Roborace Design

Roborace Has a Working Prototype Car, and It Looks like This

Vlad Mitrache
Everyone - except maybe for the professional drivers - should be excited about Roborace. The new racing series featuring autonomous cars will debut sometime during the 2016-2017 Formula E season and despite all the secrecy surrounding the project, it sure looks like things are entering home stretch.
5 photos

Earlier this month, a near-final version of the Roborace vehicles' design has been shown, and even though it looked almost identical to the original concept, nobody seemed to mind. That's because the every detail of the car was penned by none other than Daniel Simon, the man behind Tron's Light Cycles as well as other futuristic vehicles. Roborace sure went to the top when it picked the person who came up with the design of its cars.

However, the working prototype that the team is using right now looks nothing like Daniel's proposal. In fact, it doesn't look like anything we've ever seen before. And that's because it is entirely custom made, aside from the cabin. That's right, it has a cabin, and that's because the DevBot (that's what the team is calling it) can also accommodate a human driver.

Scheduled for a public debut on August 24 at the Formula E open practice session at Donington Park, the DevBot is currently used to gather as much data as possible, with the added benefit of having a human driver on board. Roborace hasn't detailed on the level of his involvement or his exact role (is he there just to observe, or does he also "teach" the car a few things?), but we do know one thing for sure: the DevBor can run around a circuit on its own.

It looks like the short footage was shot on the British Silverstone circuit, which would make sense considering the DevBot is scheduled for its debut in England only a few days from now. The video doesn't show much, and the autonomous race car clearly doesn't go as fast as we hope the real ones will, but it's still reason for excitement. It shows that Roborace is putting the final touches on the basic software and hardware levels that each team will be given at the start of the series, which means the actual debut can't be too far away.

Besides, even though we know it is totally irrelevant, we kind of dig the looks of the DevBot. It's a mix between something from the Mad Max universe and a stealth bomber, and that's a surprisingly good melange. Still, nobody will be missing it once Daniel Simon's creations will start zipping on the track, which isn't too far away now. 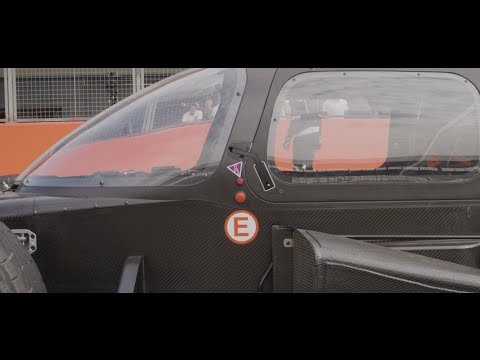