Robert Downey Jr. Is a Rad Rider, “Lovin’ and Appreciating” the RadRunner

As the Dothraki women would often say on Games of Thrones: “it is known.” It is known that one of the surest ways to increase attention to your products is to get some sort of celebrity – or, as of late, an influencer – to advertise them.
38 photos

Sometimes, the association of the two, celebrity and product, happens by chance. Regular, non-famous riders of the Rad Power Bikes e-bikes are convinced that this is the case with Robert Downey Jr., one of the highest-paid and arguably most popular actor in recent years, thanks to his Iron Man role in the Avengers movie franchises.

“#Brother Chris Cuomo and I summer lovin’ and appreciating these Rad Power Bikes ... #riderad #ebikes #radrunner #eastcoast connection,” RDJ wrote in the caption to a photo of himself and Cuomo on RadRunners earlier this week.

Of course, we have no way of knowing whether these two got their e-bikes for free from the maker and, as such, if they’re actually advertising it. The fact that they’re on older-generation models would seem to indicate the opposite, and the mere idea has gotten the wide Rad online community raving about it on Facebook.

That said, RDJ isn’t the only celebrity loving Rad Power Bikes. Justin Bieber has been riding them since last year: he was spotted on an original RadRunner, but also on the newest RadMini, the fourth-generation model. As of late, he’s been riding a RadMini customized with his Drew logos and colors, and by the looks of it, House of Drew might even be selling the model soon. 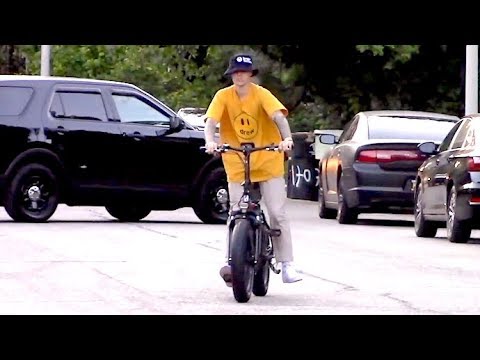