5 EarthRoamer HD-005 Will Have You Feeling Like the King of the Castle, Costs a Fortune
Up Next

If you're at a point in life where you're unhappy with something, you should act on it. Change can be hard, but the result should be more than worth it. So if you're sick of being sedentary, year in and year out, choose the life of an explorer and head on out onto the open road. That's what 38-year-old Lindsey Kszos from New York did.

You might remember that last month we ran a special RV Month here on Autoevolution. Upon searching the Internet for inspiring stories, we came across an adventurer that goes by the name of "Girl Gone Glamping." It took a while for us to be able to coordinate the interview with Lindsey, but even though we're currently in full effect with Sea Month we knew we just had to share her story with you as well.

She got a taste of life on the road early on, as her parents had a tiny pop-up camper that they would often use. Lindsey's father had a big influence on her, as he used to race in SCCA events and also ride Harley Davidson motorcycles, among other things. By the time she was 9 years old, he had built her very own GoKart. Even though she grew up in a small farm town outside of Buffalo, that didn't stop her from dreaming big.

"As much as I love that I grew up in a small town, it shaped who I am today. I knew early on that I wanted to travel, and I wanted a big life." She has been traveling solo for almost six years now, and she's gathered enough memories to last her a lifetime. That's not going to stop her in her tracks just yet, but she still vividly remembers the time spent with her 2014, 23 ft (7 meters) long Airstream camper.
She spent about $50,000 for a mint condition model, which she used to cover the entire east coast, from New York to Main and then down to Key West in Florida. On this journey, she met up with old friends and also made new ones in the process. But she wasn't going to stop there, so she headed out west with it. At one point, Lindsey decided to rent an EarthRoamer for about five months.
This was one of the company's older models, and she drove it around for about 6,000 miles (9,656 km), hitting almost every ski mountain on the Ikon Pass during the winter season. "I drove it to Canada and skied from Calgary to Vancouver! It was the most incredible experience, a trip that I will remember for the rest of my life. It also inspired me to sell the Airstream and get my current rig."

Speaking of which, she is now the proud owner of a 2016 Overland Explorer X10 Flatbed Camper that sits on a 2014 Ram 3500 with a 6.4-liter HEMI engine. This is certainly a few levels higher than her previous setup, and that's also clear considering that she has invested about $170,000 so far. That's still less than half of what you'd have to pay for a pre-roamed LTTS-118, so hearing Lindsey call it a "Poor Man's EarthRoamer" makes sense.

"I wanted this rig because it's a true four-season camper and I do a lot of winter camping/skiing. It also comes off the truck, which I love for resale value. I've had this rig all over the United States and Canada. Between all three of them, I've been to every state except Hawaii." We were curious to learn what kind of an upgrade she would consider for the future if the budget wasn't an issue, and her top 3 choices are the new OEV Summit X series, an EarthRoamer, or the new TruckHouse Co rig.

In case you're thinking about going down this path soon, we also asked Lindsey what she would recommend to any aspiring campers out there before purchasing a rig: "I always tell people to make a list of their MUSTS. For me, those included a toilet, a shower, and a bed that I didn't have to make into a table every day. I also wanted it to be well insulated and capable to handle the winter season."

"That's a good way of weeding out rigs that don't fit your needs. Also, you need to ask yourself where you are trying to go with it. But above all, don't think you need to know everything before starting, and don't think it needs to be 100% perfect. You will learn as you go, your needs will change and you will also adapt. The result will most likely look different than the original idea."

We imagine that life on the road isn't always easy, and we asked Lindsey about some of her difficult moments out in the wild. "There are hard days for sure, and when things break it can become overwhelming. Since I've started living this life, there have been very few times I've felt scared. I try to be aware of my surroundings and I always have my location shared with my mom and best friend. And if something doesn't feel right, I keep driving."

Even though winter can be the most difficult season for campers, Lindsey still loves doing it as it goes hand in hand with her passion for skiing. But if she were to pick a time purely for camping, spring would be the first choice. Between riding motorcycles, traveling cross-country, meeting people, and making lots of memories, she also pointed out that all these factors combined will transform a person.

"I've always been a pretty strong independent person, but this lifestyle has shown me what I can handle and what I'm made of. It's pushed my comfort zones and blessed me with some of the most amazing life experiences I couldn't have even dreamed of. I meet people all the time and most of them are good, my faith in humanity has been restored. There is a whole new wave of #vanlifers living this lifestyle and they're doing it well. I've made some long-life friends that share in the same love of travel and Overlanding that I do." 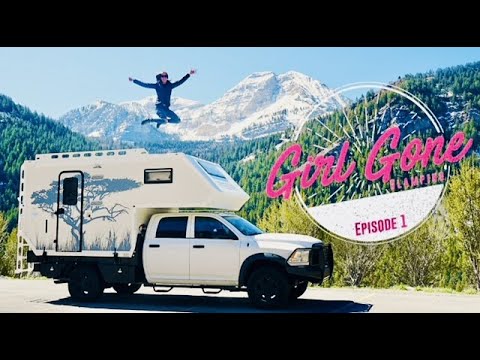 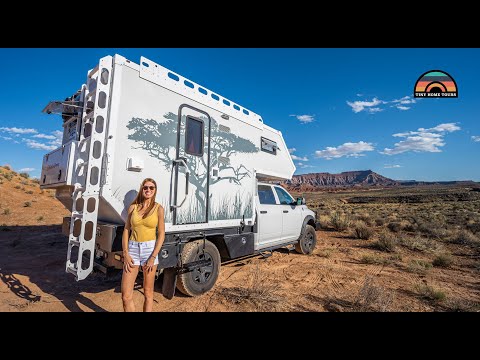