3 Driving a Rivian R1T With Zero Miles of Range Pays Off, Until It Doesn't

4 The First Ford F-150 Lightning Was Officially Delivered, Guess Who Bought It?

5 Jay Leno Got His Hands on the F-150 Lightning, Says It's a Real Gamechanger
Car video reviews:
Up Next

Rivian R1T Owner Gets to Drive the Ford F-150 Lightning, Has a Lot to Say

Rivian R1T and Ford F-150 Lightning are two different takes on the old pickup truck. The former came first into the market with a fresh approach and bright ideas. However, Ford still has experience building America’s most beloved truck. It’s hard to compare the two pickups, but one R1T owner takes the plunge and shares his first impressions of the Ford truck.
8 photos

The old EV vs. ICE rivalry is getting much more complicated as more traditional carmakers push electric vehicles into the market. This is true even for the pickup truck segment, which was once considered a bastion of combustion vehicles. Rivian was first with the R1T, but GM soon followed with the GMC Hummer and Ford with the F-150 Lightning. This has prompted new comparisons in the never-ending game of “mine is bigger than yours.” This video shared on Youtube by Rivian Dad shows that objective views are still possible.

The Rivian owner behind the Rivian Dad channel has never driven or touched the Ford F-150 Lightning until now. Thus, seeing his first impressions as he discovers Ford’s electric pickup is interesting. His first words as he climbs inside the cabin express his surprise at the number of physical buttons in the cockpit. As Rivian went with the more tablet approach, where everything is controlled using touch and gesture, Ford is more traditionalist, with many buttons to access the essential functions.

It’s in no way inferior, as the author emphasizes, just different from what he was used to. This impression goes beyond the infotainment system, as the two pickups set themselves apart. While the R1T is an adventure-oriented vehicle with plenty of oomph in the off-road department, the F-150 Lightning shows a more down-to-earth character. Ford indeed sells the Pro trim to businesses for as low as $40,000, while Rivian asks at least $67,500 for its cheapest version of the R1T.

The F-150 Lightning’s cabin is comfortable and appears more spacious, especially for rear passengers. Rivian Dad also likes the more thorough information offered to the driver via the two displays in the cockpit. He likes less the lack of an adjustable suspension, although the F-150 Lightning does a fine job absorbing bumps. As for the driving experience, the Lightning seems pretty much on par with the R1T in acceleration.

At the end of the day, it becomes evident that the two pickup trucks are very different, which is a good thing. They target different customers with diverse needs, so everyone can choose what suits them best. Having more options in this segment is always a good thing. This will improve once the Chevrolet Silverado EV and GMC Sierra EV join the party. 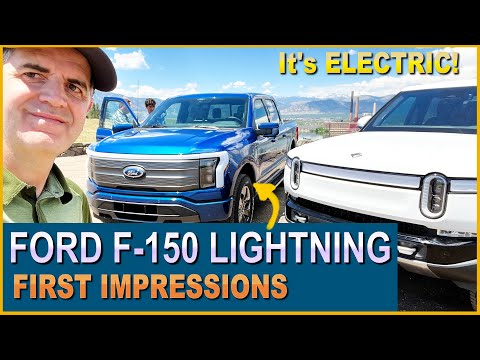