1 Rivian R1T Shows Impressive Fit and Finish Qualities, but Is It Watertight?

2 Check Out This POV Night Drive Video With the 2022 Rivian R1T, It Even Has 3D Audio

3 2022 Rivian R1T Electric Pickup for Sale at No Reserve, Auction Ending in a Few Days

5 YouTuber Gets His Brand-New Rivian R1T, Immediately Takes It Off Road
Up Next

India Warns Tesla It Will Not Accept EVs Made In China

Home > News > Car Profile
Cristian Agatie
Over-the-air updates allow carmakers to continuously improve their vehicles with new features and optimizations. Recently, Rivian pushed the 2022.11.02 software update to the R1T fleet, increasing the maximum DC fast charging current from 450 A to 500 A, among other stuff. While encouraging, this slight bump will not change things significantly at the charger.
6 photos

Although the scope of this update is a lot larger, the highlight seems to be the increase in charging current to 500 amps. This means the peak charging power will jump from 200 kW to around 220 kW. It’s not a huge jump to be sure, but nonetheless, a welcome one that will see Rivian R1T owners spend less time fast charging their truck.

Of course, theoretical specifications have little to do with how things are going in practice. To be able to benefit from the new feature, Rivian owners need to find a fast charger powerful enough. And even then, there are thermal constraints that can limit the maximum current a vehicle can draw from the charging station. This becomes obvious from the video test that Kyle Conner from Out of Spec Reviews did after the update.

As you can see in the video, the Rivian R1T can take 498 A at a lower state of charge. According to the charger’s display, the peak power reaches 217 kW at around 40% SoC, which is above the 210 kW that Rivian specifies in R1T’s documentation. Despite this change, the total charging time does not see a significant reduction.

The charging curves show that the power drops sooner than with the lower current of the previous software. This is a clear indication that the higher current prompts thermal limitations that basically negate the benefits of the new update. Unfortunately, we don’t know if the new update shortens the charging time and by how much, so let’s just say this is a tie. Nevertheless, seeing Rivian unlocking more performance from the hardware on its vehicles is just great.

Other improvements that come with the new software update are related to the charging experience at third-party charging networks and the way the R1T's air suspension works in different scenarios. There are also improvements to how the infotainment system works, as well as the climate control system and the safety assistance systems. 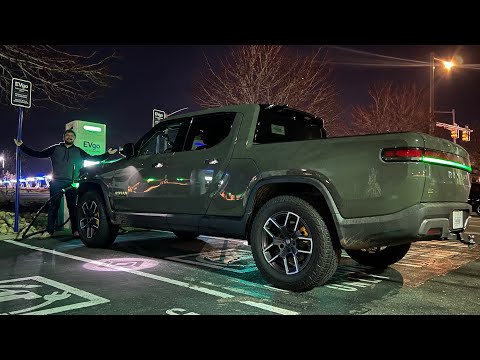