4 Rivian Has Spent $1.75 Billion in Research and Development Since 2019

Rivian R1S Prototype Spotted in the Wild, Looks Just As Big as a Chevy Truck Parked Nearby

A Rivian R1S prototype was spotted in the wild while charging in San Diego. The electric SUV looks even bigger than a Chevrolet truck parked next to it.
10 photos

Rivian appears to be the next big thing in the realm of electric vehicles, even surpassing the market leader Tesla. The startup announced it will start deliveries of its R1T pickup truck as soon as January 2022 and some lucky employees and early adopters already had the chance to drive it home. It should be, therefore, the first electric pickup truck to hit the market, before the Tesla’s Cybertruck or Ford’s F-150 Lightning.

The other model in Rivian’s lineup, the R1S electric SUV, is reportedly delayed until summer. This is one of the reasons people still fret when they see these beauties in the wild, especially as they did not shed the camouflage wrap yet. And with all this modern technology and camera phones, it is not at all surprising that a real estate owner grabbed his phone and made history with this video he uploaded on YouTube.

The video is not quite new, mind you, being recorded on October 31, but it is still interesting to see the Rivian R1S feeding with electricity at a Target charging station in Vista, CA. So far, there haven't been many videos with the R1S. Unfortunately, the amateur cameraman missed the opportunity to gather more information, like the charging power and state of charge. We get it, the looks on his boy in the back pretty much explain everything.

From the video, the Rivian R1S looks just as big as the monster Chevy Silverado that’s parked next to it. This is somehow expected since it’s a three-row, seven-seater SUV. According to technical details offered by Rivian, R1S is, in fact, much smaller than the Chevy, at 200.8 inches long (5.100 mm). Even the R1T pickup is bigger than the SUV, with a total length of 217.1 inches (5.514 mm).

Despite the delays, Rivian was busy ramping up the production and even setting up plans for an expansion, both in the U.S. and overseas. The talks are well underway with the UK government for a new factory in Somerset. 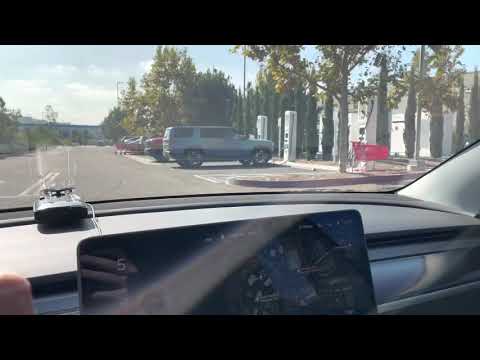