1 Rivian Also Seems to Suffer from Whompy Wheels – What Caused This One to Fall Off?

5 Rivian's Going to Give Pre-Order Holders the Buyer's Agreement, They'll Get the $7,500
Up Next

Home > News > Float and Dive
Tim McKenzie
Motor boaters are a creative, resourceful, and resilient bunch and there is no better time to put those attributes to work than when you are waiting to launch your boat for a day on the water and you find yourself stuck in a lengthy queue.
8 photos

The resource this boater utilized to launch his boat at Bear Lake, Idaho, came in the form of a Rivian R1T pickup truck. Tired of waiting and wanting to make the most of the time on the water, getting in the water asap was paramount. So, he simply drove his boat trailer onto the firm sandy beach and proceeded to do a shore launch.

To show his guile and confidence in his ability to pull it off, instead of backing the trailer into the lake, this guy drove straight in and did a water 'uey' without hesitation. With the u-turn maneuver complete, the intrepid boater put his R1T into reverse and backed his 4,000-pound (1,814 kg) 2004 Malibu 23 LSV into the lake. Needing three feet (1 meter) of water to float the boat off the trailer, the depth was well within the R1T's maximum water depth of 43” (1,092 mm). Had he gone beyond the depth marked on the black trim around the wheels wells, there was no danger of turning the truck into an actual u-boat.

The Rivian R1T would just simply begin to float.

The owner would later say he had performed the maneuver three or four times over the course of several days. He was savvy enough to set the drive mode to Off Road Deep Sand Mode and unplug the trailer lights so as not to have the R1T automatically go into Towing Mode.

It is a pretty impressive feat and certainly shows off the versatility of the 835 horsepower, quad-motor pickup truck. 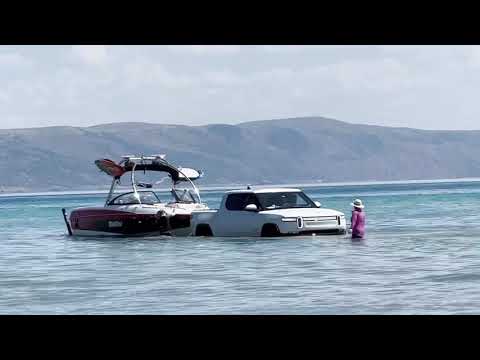