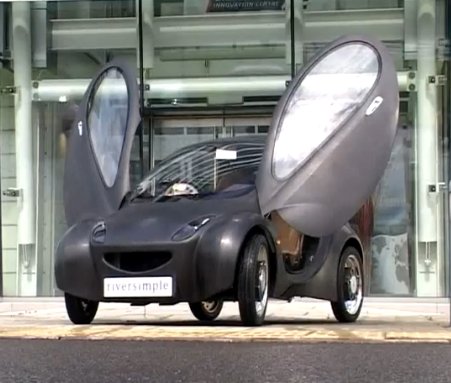 As we reported almost a week ago, somewhere in Britain a company called Riversimple, together with partner Horizon Fuel Cell Technologies are developing the "world's first low-cost and practical hydrogen car".

Today we come back on the story to give you the first video of the Riversimple hydrogen powered small city car. Loosely translated, this means we can see, for the first time, how the thing really looks like. The general idea here, at autoevolution: funky (which does not necessarily mean "bad"). A sort of a fortwo embryo, one we wouldn't be ashamed to take for a spin, to be honest.

The Riversimple promises fuel consumption equivalent to 360 miles per gallon (0.8l/100 km). The vehicle uses a 6kW fuel cell sourced from Horizon and is made of lightweight composite materials. The car can travel 240 miles (390 km) on a single tank of hydrogen.

"Horizon's approach to commercialization of fuel cells perfectly complements our approach to bringing hydrogen fuel cell cars to market. Thanks to this partnership, we believe that we are closer to market with a commercially viable fuel cell car than anyone else in the world," Hugo Spowers, Riversimple's founder said a few days ago, when the car was first unveiled.

The plan is to offer the Riversimple as an open-source vehicle. For the consumers, Riversimple plans on leasing the car at an estimated price of $315/month. The release date has not yet been set, given the car is still under development.