2 Fern Dropper Post Is Specifically Designed for Kids, Takes Their Riding to the Next Level

5 Forrest Gump-Inspired Bamboo Handlebars Will Change the Way You Ride Your Bike
Car video reviews:
Up Next

Whenever you think about an electric vehicle, the last thing to normally pop into your mind is a bicycle. Well, thanks to technology, bicycles are becoming means of transportation that go beyond just flexing your quads and calves, but also beyond the tarmac.

Folks, e-bikes are in power. With a nearly three-fold increase in urban mobility in recent years, it’s a trend that seems to show no signs of slowing down. One company keeping up with current e-tech is Kinesis Bikes. Never heard of Kinesis? Well, few people have as they’re bigger over in the U.K. and Europe, but do have a subsidiary in Portland, Oregon, United States.

Initially started by a group of former Giant Bicycles employees, their first point of focus for the industry was on components, let alone entire bikes. Today, all that’s a bit different, and Kinesis is one of those teams you really should keep an eye on if you’re into bicycles of any kind.

One bike that’s capable of displaying exactly what this team is capable of achieving is the Rise hardtail e-MTB. Why show off another hardtail e-MTB? Well, this one features one of my favorite e-drivetrains currently on the market, a Fazua.

If you’ve never heard of Fazua, then this may just be a treat for you. Fazua is a team that’s been around since 2013, time in which, they’ve been developing an entirely different drivetrain system than the ones you may be used to.

Unlike classic hub or mid-mounted motors, Fazua does things differently by including the battery and motor all into one neatly wrapped and removable package. What this means is that the drivetrain and battery pack can simply be removed and you can continue riding the bike unassisted by electricity. The only component of the system that stays in the bike is the custom bottom bracket, an essential component to this system.

According to the Kinesis webpage, with this motor and battery system, the Rise can achieve up to 450 watts of assistance, while the battery pack brings 250 Wh of juice. With three different ride modes, you can access anywhere from 125 watts of motor power, up to the 450 watts I mentioned earlier, each mode obviously affecting your range and speed.

Now, all that electric goodness has to be mounted onto something. We call that something a frame, and for the Rise, Kinesis is using good ol’ hydroformed aluminum. With internal cable routing and the Fazua drivetrain hidden in the down tube, the result is a clean MTB that also offers the feeling of a proper hardtail bike.

The rest of the drivetrain is provided by Shimano, with an SLX 11-speed setup. Shift levers, rear derailleur, and 11-46 T cassette, all are SLX. Rims and hubs are provided by Sector 9E E-Specific components, while tires feature a Maxxis DHF on the front and a Maxxis Aggressor on the rear, both with 2.5-inch diameter.

As you know, hardtails happen to rely heavily on tires for cushion and shock absorption. However, most hardtails do feature a traveling front fork. That’s not to say there aren’t any rigid front fork hardtail MTBS out there, but I have no idea what to say about them as I've never ridden one. Plus, they look weird. Not the Rise, as a solid 130 mm (5.12 in) of travel is offered by an X-Fusion E-Slide 34 fork.

Personally, I'm all up for a Sram drivetrain, but who am I to judge your tastes. While some people may think that the Rise is too expensive for their lifestyle, remember, you aren’t just buying a bike, you’re buying an EV, in the shape of a bike, that just so happens to like taking you on off-road adventures. 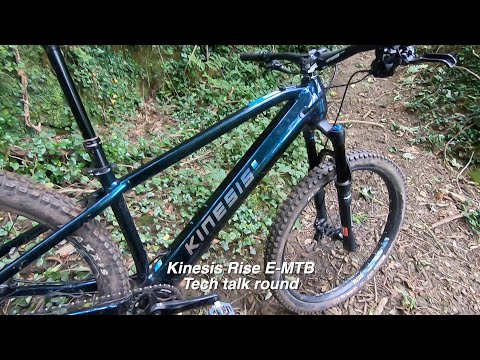