2 Rimac Nevera Is Faster, More Powerful Than Your Dream Car – And That Says It All

3 This Is What Drifting $2.4 Million in Almost Complete Silence Looks like

5 This Is Where Future Rimac Hypercars Will Come From
Coverstory

Once you’ve become a force to be reckoned with in the automotive industry, you must step up your game at some point. This seems to be the case with Rimac’s future campus meant to start operations in 2023.

Earlier this year, Rimac, the same ones responsible for automotive innovations that have led to vehicles like the Nevera electric hypercar, have announced a new project: designing and building a new campus dedicated to every aspect of Rimac research and development.

To make the venture possible from an architectural aspect, the automaker teamed up with world-renowned architectural experts at Studio 3LHD and Protema Management Consulting to ensure that the project meets or exceeds all levels of innovation and integration. After all, the Rimac Campus is meant to be a whole lot more than just a place where people build cars; it’s supposed to be a community as well.

Located in Sveta Nedelja, only 16 km away from Zagreb city center and connected to highways and even an airport, from a logistics point of view, the campus is primed for success.

At this time, the Rimac team is comprised of over 1,000 members, but the new campus is meant to accommodate near three times that, over 2,500. The innovation center alone will accommodate 1,100 R&D members, and includes a command center, design studio, labs, and even VR rooms. The latter being an absolute essential element in modern product development no matter the industry.

Since Rimac is known for producing EVs, there must be a place to test them, right? Well, to do that, the automaker has included a test track running round the facility. This element isn’t only essential for real-life testing of developing elements, but it’s also one badass way to attract a would-be customer. After all, what better way to sell a vehicle than through the experience of feeling it on a track.

There's also a customization showroom and museum in place, not to mention factory tours (I wonder if they’re free). Rimac also states that they will have these facilities open to all, and the space includes no fences or walls. But I'm sure you’ll need a clearance badge for access to all the nooks and crannies.

Being a manufacturer that is EV-inclined, making them eco-friendly, the spirit of green energy and sustainability, continues with features like green roofs with countless solar panels, living plants in atriums and internal spaces, and even organic food production is in the plans. Not to mention farm animals roaming around designated spaces. Might be a bit tough with no fences though.

Whenever you’ve got near 3,000 workers hustling and bustling around a space for eight to God knows how many hours, you’re bound to have all sorts of issues coming up. One way that Rimac is looking to better the lives of its employees is through game rooms, sport facilities, a restaurant, and even a kindergarten. Countless relaxation and meeting spaces are also in the blueprints.

Finally, they're planning to continue and increase e-bike production with sister company Greyp Bikes and have this aspect included into the new campus plans. After all, we can all agree that it’s easier to sell an e-bike than an extravagant hypercar.

If you do happen to end up being a guest of Rimac at some point after the campus is operational, you will be housed in individual suites that have been spread out through the campus. These nature inspired cabins are to take you away from the classic hotel room experience most of us are used to.

One thing is for sure, with this new campus, Rimac is ready to embark on its next chapter of EV production. GG Rimac, GG. 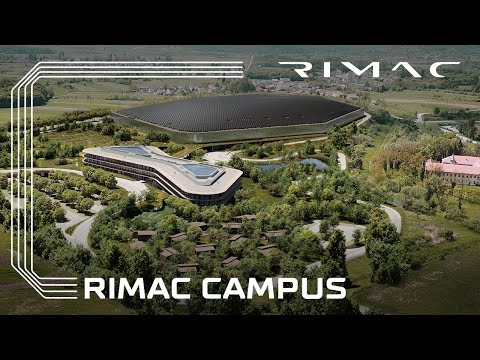