Aurel Niculescu
There are quite a few all-electric supercars that mesmerized us in recent years, from the record-setting NIO EP9 to Tesla’s promised second-generation Roadster. Not to mention the Pininfarina Battista, the Lotus Evija, and countless little startups that promise the entire (electrified) world and almost never deliver.
7 photos

There’s one company from Croatia who already proved itself, though. It’s Rimac Automobili, which initially appeared to be just one of those automakers that needed to be taken with a (heavy) does of salt. That was until they succeeded in producing and delivering the Concept_One.

With that success in the pocket, they set out for the ambitious goal of demonstrating they’re not one of those one hit wonders. That’s where the C_Two comes into play, another fully electric hypercar that was revealed to the world since 2018.

2021 is now being labeled by the company as the year of the production-series model’s introduction. Before that happens, there are still some intermediate steps to be taken, though. Rimac has now announced that its new production line created at its Veliko Trgoviše, Croatia-based facility has started the build process for a pre-series of six C_Two units.

Unlike the previous 12 experimental and validation prototypes – which were mainly used for testing, validation, and crash tests – these new examples “are basically production-spec C_Twos, with a fit and finish, drivability, and reliability that is nearly production-ready.”

These units are another step closer to the final series-production model and will be used to incorporate modifications as needed or according to issues found during the “homologation tests, durability tests, trim experimentation, NVH tweaking, and global product evaluation.”

Interestingly, Rimac also details a bit its new production line, which has cut down the production time needed for assembly in half to around eight weeks. Of those, five weeks include actual work on the car and another three of preparation, during which time components are created in-house and delivered to the final assembly line.

More so, the company says that everything has been custom designed to make sure that all components can be fitted quickly (including the 120-kWh battery pack and powertrain, both designed and built by Rimac) and to high standards. The plans are to churn out up to four C_Two units per month once series-production is in full swing. 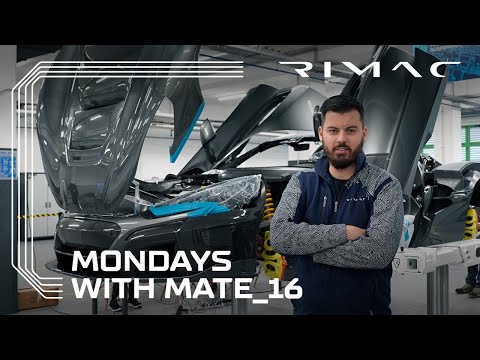