1 Porsche Continues to Invest in Rimac, Croatian Company Set to Expand in 2022

3 1,887-HP Rimac Nevera Reviewed in the Snow, You've Been Saying Its Name All Wrong

Almost 12 years ago, Mate Rimac was still a young Croatian engineer with a big dream. He had already given up hope on the internal combustion engine, as he switched to electric power for his BMW E30. The car had proven its worth in defeating several different sports cars, but Mate was still years away from becoming one of the most successful men in the automotive industry of the 21st century.
7 photos

The introduction of the Concept_One served as a further stepping stone in developing the company to the next level. But Mate knew he had to further refine the product into something even more special. Years of work and technological advancements finally led to the 1,914-hp Nevera.

And it has already made a name for itself as one of the fastest production cars of all time. According to the manufacturer, the Nevera should be able to go from a standstill to 186 mph (300 kph) in 9.3 seconds. Even more so, the top speed is set at 256 mph (412 kph).

Last year the Croatian electric hypercar even took on the Goodwood Festival of Speed, where multiple journalists and potential customers could experience its capabilities by sitting in the passenger seat. Rimac was already popular in the United Kingdom after the Concept_one had set an electric record in 2017.

At the time, it managed to go up the hill in 54.89 seconds, which is quite fast even by today's standards. Alas, Romain Dumas crushed that record in 2019, when he finished a lap in the Volkswagen ID.R with a time of just 39.90 seconds.

The 2022 edition of the Goodwood Festival of Speed is on this week in the United Kingdom, and the Croatian company is offering fans a once-in-a-lifetime opportunity. So, if you're keen on seeing how fast it can go but can't afford the $2.4 million price tag, this might just be your chance at riding shotgun.

As you would expect, Chief Test Driver Miro Zrncevic will be the man behind the wheel. And, as I've mentioned before, he knows a thing or two about going sideways. Rimac has revealed the four steps you need to go through via their Instagram account if you want to see what their hypercar is all about. 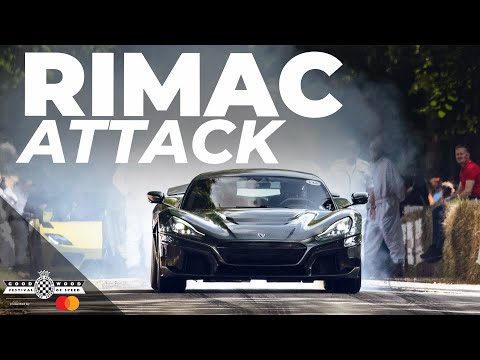