For the better part of the last decade Tesla has been at the forefront of electric vehicle development, as they've constantly faced the challenges of building such vehicles. But the global push to reduce CO2 emissions has lead to an accelerated process of moving towards electric power, and new players emerged. One of the most technologically advanced is Rimac Automobili.
4 photos

At the rate the company is growing at, Rimac might just become one of the strongest players on the EV technology market over the next decade or so, as not only are they building one of the world's fastest, most impressive electric hypercar, but they're also extending outwards by collaborating with huge automobile manufacturers such as Porsche and Hyundai.

The level of technology they've brought to the game has sparked interest not only from major companies, but also from key industry figures such as ex-F1 driver Nico Rosberg, who will be one of the select few people to own a Rimac C_Two starting next year.

But as company founder Mate Rimac already pointed out in a previous interview, even though the car is about 95% complete, the last 5% of the way might just be the most challenging part, and judging by their latest presentation, he sure wasn't kidding.

As part of the homologation process, the C_Two Prototype was sent to SLG Testing and Certification in Germany, for something that might sound more like a science fiction scenario rather than real life for some.

Placed inside a semi-anechoic chamber which is completely sealed off from outside world interference, the car undergoes electromagnetic compatibility testing. As we are talking about a fully electric vehicle, the challenge is even bigger than with an ICE-powered car, as the test aims to see how the electromagnetic waves emitted by the car interact with the outside world, and also how the car reacts to electromagnetic inputs coming from the outside.

With such a high level of development, nothing is left to chance, and we really love the fact that the team over at Rimac goes to such lengths as to show and explain so many of the important steps and processes involved in building an all-electric hypercar. 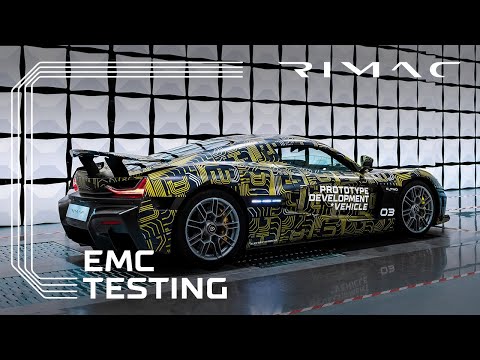 At Rimac, precision development and advanced engineering is everything. So, for the latest stages of development testing...