Vlad Mitrache
Mate Rimac, the founder and CEO of Rimac Automobili, probably felt the opportunity to keep the momentum going after a video of a C_Two acceleration run surfaced on the internet, so he decided to come out and offer us a bit more information about the upcoming electric hypercar.
6 photos

The video gives a transparent view of how the car's development is going as Mate doesn't try to hide or sugarcoat anything. Compare that to Elon Musk's way of doing things, and you couldn't get two more divergent pictures even if you tried. Admittedly, the two companies operate on different scales—one sells a handful of really expensive hypercars, the other shifts 500,000 units a year—so it's natural to be managed differently.

According to Mate, the pre-production car they use for testing purposes is at "85 to 90 percent" of its final performance levels, with torque delivery and top speed limitations being the primary bottlenecks. However, he does say you should never trust the manufacturer's claims (even though in a different context), so we'll follow his advice and believe it when we see it.

Well, that shouldn't take too long, apparently, as Mate reveals that the first customer cars should begin production in no more than two months. He also says the first independent reviews from car journalists are just around the corner, so things are indeed starting to heat up around the C_Two. Oh, by the way, that's not going to be its final name, but that too (you guessed it) is going to be revealed shortly.

So, what do we get out of this clip, other than a few promises and a clearer image of the development state? Well, how about a complete thrashing of a Porsche Taycan Turbo S? Sure, you can buy ten of those for the price of one Rimac C_Two, so it's not exactly apples to apples. However, let's not forget that Porsche's EV is one of the quickest-accelerating cars available.

We also get to see an eight-second run happen before our eyes, with the C_Two improving on the 8.99 seconds we've seen in the previous video. A few things to bear in mind, though: the car is on street tires (Michelin Pilot Sport 4 S, but still no slicks or drag radials), it runs on an unused airstrip with a pretty poor running surface (see all that dust the cars are kicking up), and the launch control system isn't yet working (hence the 2.42 seconds it needs to reach 60 mph).

The Taycan race is there simply to give us a better visual representation of what that speed looks like, and it does its job. However, it also shows just how big of a difference a launch control system will make for the C_Two. It potentially enables it to fulfill that 1.85 seconds 0-60 mph promise and thus keep up with the likes of the Taycan Turbo S and Model S (and probably the new Tesla Roadster as well, if it pleases to show its face any time soon) off the line, just before it leaves them in the dust with its 1,914 hp quad-motor setup. Love or hate EVs, it's hard not to get excited. 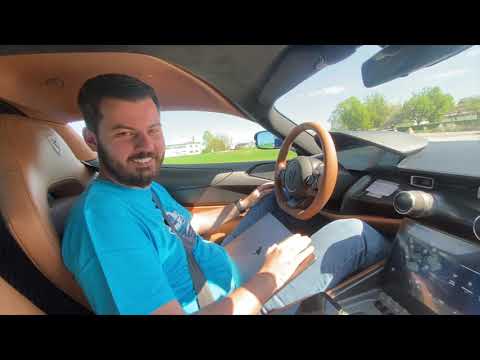