3 Rimac Showcases the C_Two Once Again In Geneva

Home > News > Safety
Dragos Chitulescu
It's been a decade or so since Mate Rimac started playing around with the idea of creating an electric hypercar from scratch. It all started with his electric BMW E30, which he used as a starting point for the development of what today is one of the most promising players in the automotive industry on a global scale.
1 photo
After fiddling around in the E30 for long enough , Mate went on to the next level by putting together a team of experts and launched the Concept One, the first official model sold by the company. A total of 8 vehicles were produced, with one serving as an Official Race Director's car for the first season of Formula E back in 2014.

This car made a strong impression from the very first moment it went public, with its four electric motors - one for each wheel - outputting a whopping 1241 horsepower and 1600 Nm of torque. Seven of these cars are still in good working state to this day, after Richard Hammond sadly crashed the 8th while on set for The Grand Tour in Switzerland back in 2017.

Even though the car was built in small numbers, the safety standards that Rimac imposed saw Hammond get out of the scary crash alive and well, which brings us to the topic at hand.

Fast forward to 2020, Rimac have grown exponentially and are currently putting the final touches on their upcoming 2021 flagship, the Rimac Concept Two. As with any other car manufacturer, this vehicle - with an estimated selling price of 2$ million - would also have to undergo proper safety tests and inspections.

And the first step would be the offset deformable barrier crash test, at speeds of 40 kph (25 mph) and then 56 kph (35 mph), which, believe it or not, generates twice as much damage, even though you'd think the difference in numbers isn't all that big.

Talking about the test, Mate Rimac said: "It is just mind-blowing how much science and knowledge goes into developing a state-of-the-art car. Have a look at us destroying crash car #3 and #4 in a space of 2 days."

If you love cars as much as we do, this video might be slightly upsetting, but at least it's the right thing to do before setting these machines loose on public roads. 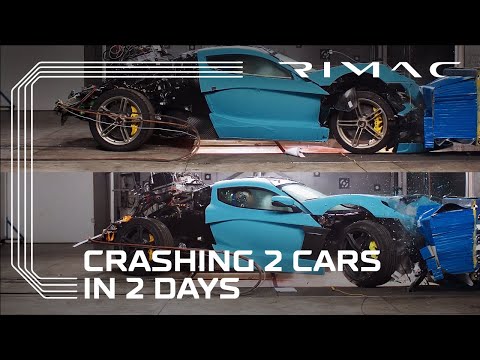