1 The Hypercar of the Future Battles the Veyron on Track, Pulls a Few Drifts

Vlad Mitrache
You've probably heard about the Rimac Concept_One by now - the electric hypercar made in Croatia that, when it's not spanking traditional hypercars on the drag strip with its well under three seconds 0-60 mph sprint, may try to kill an unsuspected car show host.
1 photo
Despite being completely totaled, the Concept_One arguably came out better than Richard Hammond out of that incident earlier this year. In case you have no idea what we're talking about, here's the short brief: the Grand Tour presenter was taking the EV up a winding road in the Alps when he got overly confident and slipped off the asphalt.

The car rolled a bit on the steep incline and caught fire after coming to a halt. Richard Hammond cheated death one more time and was able to talk about it shortly after, even though he still seemed a little shaken. But he never blamed the car. The only thing he could have accused it of was having over 1,200 hp and 1,600 Nm (1,180 lb-ft) of torque anyway.

Even though we'sure that Mate Rimac, the CEO of the company, would have preferred the very expensive and rare car to remain in one piece, the accident might have done the small Croatian manufacturer a service as well. With a high-profile figure such as Richard Hammond involved, the Concept_One made the news like never before making the name known among petrolheads who wouldn't have bothered to check it out otherwise.

But that doesn't mean the Croatians aren't still looking for all the publicity they can get. Here, they've taken Italian YouTuber Marchettino in the passenger seat of the 1,224 hp electric hypercar, and his reactions are fabulous. The video starts a bit slow by showing the vehicle's impressive menus which offer countless stats and lots of information, but it's not long until all that power is unleashed.

The moment coincides with Marchettino's short giggling fit that he certainly wishes he could have held back in retrospect. It all kicks off the moment he realizes the speedometer was set in miles per hour, instead of kilometers per hour, so the 100 he saw was in fact 162 of the more familiar km/h.

Have a look at the entire video if you have the time and if you've never seen a detailed presentation of the Rimac Concept_One because the level of technology in this vehicle is truly phenomenal. Anything you can possibly think of that has the slightest connection with the car can be displayed on that screen in the central console. It really feels like they've thought about everything. 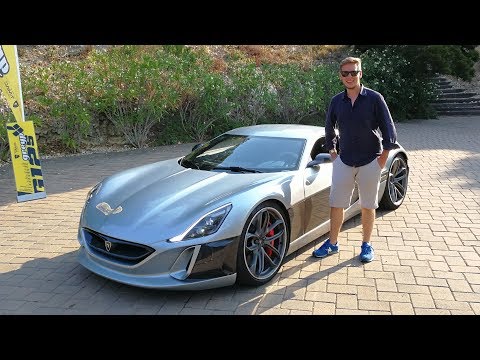