You may or may not have heard of Rimac Automobili, but you will most definitely remember that name after you see this video and, even more so, after you hear the numbers its first production car can brag about.
1 photo
Just to get it out of the way quickly, this is a 100 percent electric car. The Rimac Concept One uses four electric motors - one for each wheel - and four gearboxes to go with them - single clutch at the front and double clutch at the rear. Unsurprisingly, the car can go really, really fast - faster than a Tesla Model S P90D with Ludicrous on the quarter-mile distance. And why wouldn't it? It too has four-wheel-drive, it has 1,087 hp and 1,600 Nm (1,180 lb/ft) and, unlike the Model S, it's got a very low and sleek profile.

In fact, the Concept One has been pitted against a LaFerrari in an acceleration test on the same distance and... let's just say it didn't end well for the Italian hybrid hypercar. But the best thing about the Rimac Concept One - the first offering from a virtually unknown Croatian manufacturer - is that it also looks quite good. It doesn't go over the top but mixes some design cues from other hypercars (most notably Koenigseggs) without losing its originality.

But if the exterior design hasn't been a secret for a while, this is the first time we get to see its infotainment system at work, and it's yet another reason for those who ordered this car to be really glad they did so. The depth of the information that can be displayed and the parameters that can be configured is astonishing, as is the ease with which everything is done.

The Rimac Concept One features a portrait-oriented central display, much like the Tesla, even though it appears to be considerably smaller. That's easily explainable since the whole cockpit is tinier, with the Concept One being a two-seater hypercar and all. However, what it lacks in size it more than makes up for in features.

It really is a tech geek's paradise, but hardcore drivers might find a few things to their liking, such as the slip angle or the g-meter for going sideways. The system also displays the charge level for every individual battery cell, which is more than anyone ever needed.

There's also a very detailed temperature monitor for every component, and it comes with a neat trick: you can view a graph of its evolution for up to 24 hours, and with a simple drag movement, two graphs can be overlaid for easier comparison. The front/rear torque bias can be adjusted with the help of a simple slider, and so is the brake-force distribution. It definitely doesn't feel like the first vehicle made by a startup company.

There are tons of other cool things that we'll let you discover in the video below. In the second half, the guy filming is taken for a ride on a twisting mountain road, so expect a lot of "woah, man," "what?" or "wow," especially since this was his first ever experience in an electric car. 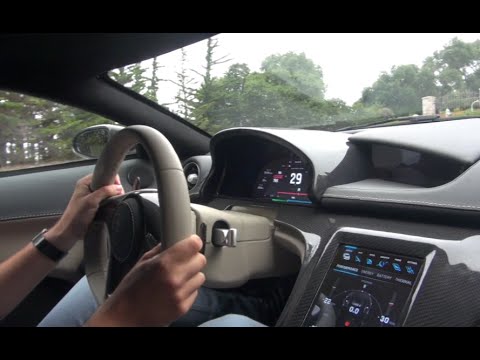