Let’s face it, with the way things are going, it won’t be long before cars fly. Wait a minute, that’s already happening. Well, by the year 2080, your new Rimac could look a lot like this one.

The rendering you see here is known as the Rimac Scalatan Vision 2080. Yes, it’s a vehicle branded Rimac for the year 2080, but beyond that, it’s a design entered in the Instagram Design Challenge for Rimac Automobili that was launched last year.

As everyone knows, the year 2020 kept a lot of folks indoors. Luckily for artists, a cocoon is the perfect place to whip up amazing designs and ideas. Rimac clearly understands this and has organized a design challenge showcasing possible futures, in this case, for the year 2080.

The design before you is from Tokyo-based transportation designer Maximilian Schneider. Most of his designs include a projection into a future that could someday be experienced. Some also reveal a focus on safety features. The Scalatan, on the other hand, seems to be more about speed. Time to look at what one possible future could hold for humans.

Now, by the year 2080, technology will have advanced so much that drivable cars will become a sort of collector's item destined for the elite; at least that seems to be the backstory for this design. Part two of the story states that the car is supposed to mold after the driver’s style, in time, to offer a completely unique and personal driving experience.

To best understand the vehicle, know that it’s composed of three different layers, each with its own functionality. The first layer is the base, not a chassis, but that aero-fin plate seen on the bottom of the Scalatan. This component is supposed to charge the car while driving along a road and can bend to alter downforce and drag.

The second layer of the vehicle is the skeleton chassis or framework. What makes this frame so special isn’t that it’s perfectly tuned to enhance your driving experience but that it’s 3D printed using titanium and carbon. This exoskeleton also hides another important system of EVs, the battery. Fused into the skeleton, lithium-oxygen cells are scattered throughout to dissipate heat faster; a reaction that’s supposed to feed on surrounding oxygen to function.

The third and final layer is the outer shell. This ultralight carbon graphene nanotube shell offers the vehicle a smooth outer surface that looks like one heck of an aerodynamic marvel. Another trick this shell can perform is that of holographically projecting an augmented reality for the driver.

Even the tires have seen a touch of technology. 3D printed using titanium and graphite, the tires include memory nanotube inlets that offer a variable tire patch. Even though they’re branded Michelin, I'm not so sure any Michelin design looks like this, maybe the Uptis.

As it stands, one rendering shows that the Scalatan can carry up to two people, which sit in line as you would in fighter aircraft. To hop on inside, the front of the Rimac opens towards the rear exposing the entire frontal framework and access to the interior. Inside, it's pitch darkness until the shell gets to work.

What I enjoyed about Schneider’s project the most are the endless prototypes created before finally settling on the shape you have before you. Some include classic spring suspension, while others incorporate the suspension into the frame shape. Some scatter the battery cells throughout the frame; others concentrate them all in one place.

Sure, it may seem like an odd and possibly farfetched design, but if you sit back and realize that major automakers such as Ford, Chevy, and countless others are using 3D printing tech as we speak, it won’t be long until frames end up looking rather like the Rimac Scalatan. And before you know it, modular fins and holographic interiors won’t be far along. Wait a minute, that sounds a lot like what’s going on now. Is it 2080 already? 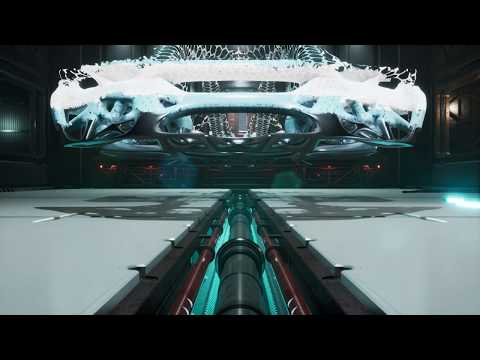