4 Female Cyclist Breaks World Record, Cycles the Length of the U.K. in 51 Hours

2023 Skoda Fabia Combi Reportedly Killed, Sounds Like an Abortion to Us

Around 29 percent of the energy we use comes from renewable sources. It is a good start, but not enough. This is why we have to keep on working on increasing those numbers. And what better way to draw attention to the matter and make a statement than by riding your bike in the sky, on the blade of a wind turbine?
8 photos

Danny MacAskill is a Scottish pro cyclist who mostly works as a street trials and mountain bike rider and is renowned worldwide for his two-wheeler stunts. This time he used his riding skills to raise awareness on climate change and the importance of renewables by doing his tricks in a renewable energy factory.

29 percent of the world’s energy coming from renewable sources meant 29 bike tricks from MacAskill, with all of them being topped by his last stunt in the clip. The cyclist rode his bike on top of a wind turbine, right on one of the thing’s blades. Granted, he was secured with ropes and hooks and everything, but still… Even the thought of sitting on a 280 ft (80-meter) or so tall wind turbine is chilling enough, let alone ride a bike on its blades, in windy conditions.

And the wind was just one of the problems the gutsy cyclist had to face, as even he admits it. It turns out that fiberglass blades don’t really go all that well with bike tires, on account of making everything too slippery, which is not something you want to experience in those conditions. But MacAskill pulled it off, and he added that riding on top of a wind turbine was something he wanted to do for a while now.

His entire number was made for the COP26, which is this year’s United Nations Climate Change Conference that’s going to kick off in a few days, on October 31. 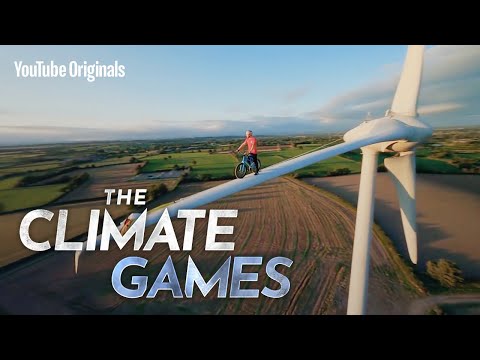