4 If Carpenters Built Supercars, They’d Be Called "Splinter" and They'd Look like This

5 Your Kid Wants These Things Really Bad, and You May Want One Too
Car video reviews:
Up Next

Once upon a time there was a British engineer and car designer by the name of William Towns. Car enthusiasts might remember his association with Rover and Aston Martin, where he became the creative force behind the spectacular Aston Martin Lagonda Series 2 wedge-shaped luxury saloon. Afterward, he successfully founded his own design studio – Interstyl – and worked on independent projects that would mostly go down in history for their quirkiness...
27 photos

The oddest of them all must be the subject of our video (embedded below), an Interstyl Hustler 4 kit car. Never mind the simple, boxy design, or the fact that its Hustler 6 version had six tiny wheels. Not even the sliding side windows that doubled as actual doors can compete with the fact that its standard fiber-glass body panels could be swapped for something a little more natural, aka real timber.

Wood is not exactly the most popular choice in the car industry – for various, but well documented reasons. There are notable exceptions – such as the American woodies of the later 1940s or the British automaker Morgan. But you are more inclined to see wood adorning the dashboard of a high-end luxury saloon rather than the outside of a crazy contraption based on the British Leyland MINI!

Still, the Interstyl Hustler arrived in 1981 at Earl's Court Motor Show completely clad in marine plywood while solid wood acted as both structure and body. The furiousdriving YouTube channel host got the chance to drive a 1982 version of the model, this time around emphasizing on his usual desire to bring viewers “something completely different.”

Well, he nailed that part all right this time, as he is also mesmerized by the little contraption that could be constructed at home, in the garage. The kit allowed the salvage of any MINI – or people could alternatively go to the local dealer for the powertrain – and then it was off to real wood sawing off. And some parts hunting, such as the Rootes Arrow Hillman Hunter four headlights.

There are even parts that have no definite origin, such as the singular Citroen wiper or the indefinite model external rear-view mirrors. The reviewer did get the Triumph Dolomite brake lights, and we’re glad he did because the fun is only starting after he wraps up the presentation.

That’s when he gets behind the wheel of this crazy little wooden car and everything starts looking as if directly taken from a Doctor Who episode. It really is a blast from the past and we hope you enjoyed it as much as we did – if you want to go directly to the driving part just skip to the 22 minutes mark. 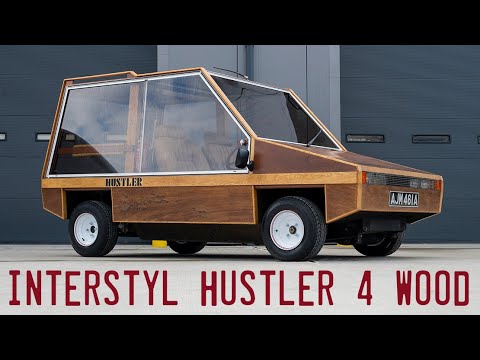