For years now, urban mobility has been growing and shows no signs of slowing down. However, since the beginning of this wave, several industry titans have been doing all the work, in the process, manufacturing the very mobility vehicles we rent daily.
41 photos

One such team is Okai, and I'm sure you've heard the name before as we've featured their works several times before. Well, after years of building alternative mobility vehicles like e-scooters, e-mopeds, and e-bikes, typically for fleet and rental businesses, this crew is now targeting the consumer. The first vehicle on their list? Nothing but the ES20 Neon, a $600 (at the time of testing) e-scooter that will make you feel like you've been missing out on such experiences.

Considering this is a rather big step for Okai, I decided to contact this manufacturer and see if I can get my hands on a Neon, just to see what all the fuss is all about. Before I knew it, I received a phone call from a delivery service asking me to come down, present my ID, and pick up my test machine. To understand what you're up against, let me start this experience from the very beginning.

I reached my apartment and unboxed the ES20; it was brand spanking new. After taking all the extras out of the box and following the instructions (setup took less than five minutes), I was soon looking at an electric scooter in the middle of my living room. The matte white handlebar and steering column are offset with a touch of aluminum. Grey grips and a grey footboard keep to the color tone of the scooter. At the top of the steering column, an LCD display sits in darkness until you power this sucker on.

After sitting around for around 4 to 5 hours, waiting for this bugger to charge, I grabbed my helmet; it was time to hit the town. Over the next few weeks, I would test this trinket's ability to offer a reliable mobility experience, one backed by a crew that's been in this game since 2006. Here's how a $600 scooter fared against the city and a human (me) that just wants to ride things as fast and hard as he can go.

Just to get right into the thick of things, this bugger does present a few features that Okai has been perfecting for years, and one of those is that 250-watt brushless hub motor. Sure, you may be limited in speed, up to 25.5 kph (16 mph) for Europe (testing grounds), but I loved how this bugger can just crunch it uphill like there's nothing better to do. No joke.

I live in a rather hilly area, and to reach my home, you must travel up a 400-yard (365-meter) hill sitting at a decent 10-15% gradient. How did this little powerhouse fare? It was able to keep me at a constant speed from the bottom of the hill all the way to the top, maybe even accelerating whenever it had the chance. On the flat, the acceleration is nice and smooth, and I could reach the top speed in around 8-9 seconds, but this depends on your weight and road conditions.

Part two of the ES20's ability to offer one heck of a ride are the comfort features Okai has added to ensure you remember the name on future occasions. Aside from the longer footboard, the front wheel features a pneumatic tire to soften blows from the front, while the rear of the Neon included an integrated suspension right into the footboard. I'll be honest, I didn't think it would make much of a difference, but boy was I wrong.

For cracks in the road, that front tire smoothens things out neatly, while the rear lays you down gently after the fact. Best of all, it can even handle a drop from a small curb, just in case you need to avoid someone while riding on the sidewalk (check local laws and regulations regarding e-scooter use). I tested this system on good old cobblestones, and the experience is a relatively gentle one, maybe a tad noisy from that rear suspension franticly moving up and down; I stayed in "H" (High, not "Hella Fast") speed the whole time. Grips? No problems here; you'll hold on to this bugger like a champ.

As for safety, wear a helmet, people! You'll never believe what can happen if you mix 25 kph with a curb, cars, or pedestrians. However, Okai took the time to make sure that your decision to leave your helmet at home collecting dust isn't the last mistake you make. So, to my surprise, as I was bombing it down my first hill, I passed the permitted top speed for my region, and the Neon's electronic brake kicked in and scared the bejesus out of me for a second. I let out an "Oh...ok. There's that." and continued cruising.

Now, there's another brake integrated into this scooter, a classic disc brake at the rear. But, the real trick is that when you hit the brakes, the rear brake kicks in first, and then the front electronic brake. Why is this important? It minimizes your chances of ever flipping over in case of an emergency. I'm not saying it's impossible, and you should take the time to practice safe braking methods before riding this or any other beast of this nature.

What I didn't like about the brakes is that the disc is rather noisy until the caliper grips firmly. You don't need to use the bell mounted to the handlebar to announce your presence to pedestrians; just give the brake a quick pump. But that doesn't take away from the fact that they work like a charm. From a top speed, I could stop in up to 5 yards (4.5 meters) of distance, with the rear locked up.

As for the range on this bugger, it's said to feature a limit of 40 kilometers (25 miles), but realistically, if you like speed, you're only looking at up to 15 miles (24 kilometers) of range. Frankly, it sounds low, but as I was relying on the Neon to help me get from point A to point B, I was able to carry out two to three trips a day and had to recharge every two days. Again, this was for short trips to a friend's place, the store, a pharmacy, and using the Neon as a last-mile solution.

Speaking of last-mile solutions, my favorite feature about the Neon is its ability to quickly and easily fold. By pressing down onto a latch found at the base of the steering column, you can fold the Neon easily, lock it into place, pick it up, and catch the bus, metro, or train. But the downside is that it comes in with a weight of 35 pounds (16 kilograms), so it may be a tad heavy for the ladies and sometimes for myself. It made me rethink getting back into bouldering, that's for sure. And no, a drained battery doesn't mean a lighter scooter.

Finally, I want to point out a little feature of this EV that won't necessarily make it any faster or better, but it is why I'm dressed as you see in the image gallery; swag lights. Integrated into the steering column and either side of the footboard of the Neon are strips of lights that won't just get you the attention you so deserve but can be changed to an array of colors and illumination styles from your phone.

And yes, like most other electronic mobility devices, the Neon does have an app with which you can track your trips and battery levels, change lighting colors and moods, and even play with ride settings. Did I mention tracking your scooter no matter where it is? You can even lock and unlock your Neon with the app, and there's an NFC card to do the same.

At the end of the day, and a month and a half later, the ES20 Neon is still holding up the same way it did on the first runs. It's still climbing strong, flexing that rear suspension, and keeping a charge without problems. I found it a brilliant way to reduce driving your car for short-range tasks and travels. Since I have this bugger in for a long-term review, we'll see how it fares against an entire summer of carrying me around. So far, it's proving itself to be a champ. 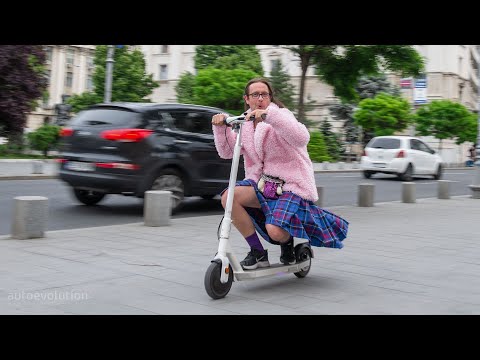 Editor's note: This article was not sponsored or supported by a third-party.
At the time of filming and testing the Okai Neon, pricing was set at $600.
Newer versions of the scooter feature different rates.