3 1955 Jaguar XK140 MC Roadster Was A Stunning XK Upgrade, Could Be a Bargain

5 James May Launches His Own Gin Brand, First Batch Already Sold Out
Up Next

Todd Halterman
Richard Hammond is a very busy man. Aside from his gig as one of the three hosts of Amazon’s auto show The Grand Tour, he also serves as the frontman for a number of other car-related entertainment projects.
1 photo
And Hammond’s Jaguar XK150 restoration project of his FHC (fixed-head coupe) was an inspirational project he and his restorers took on for a new show during the early months of the pandemic. It’s the last of the XK Series models which came before the fabulous Jaguar E-Type.

According to Hammond, the car came to him painted a “rather ugly dark red” which also happened to cover over a host of other more pressing problems. Those problems represented “a horror story” as the car had been previously crashed.

“Like a lot of these cars, it went through a phase of being worth two quid and a packet of crisps,” Hammond said. “It hadn’t been extensively repaired and restored. It had been bodged and lashed together.”


The Jaguar XK150 features include factory 16″ wire-spoke knock-off wheels, polished trim. In addition, the Smiths gauges and the car's interior were rebuilt with reupholstered seats, retrimmed dash and panels, and refreshed wood interior trim.
The restoration was completed by the father-and-son team of Neil and Anthony Greenhouse as part of a new TV show for Discovery+ UK, Richard Hammond's Workshop. The show was filmed as part of Hammond’s new business, The Smallest Cog.

Hammond, 51, and the Greenhouses were filmed by TV crews as they opened their new business.

Hammond says the restoration brought with it some unique challenges, such as the coachbuilt methods used to assemble the cars originally.

“Restoring one of these is a big job,” he said of the project. “Because no bit of it was straight. The shut lines were never tight - things were not the same on one side as on the other - so when it comes to restoring one, you really are building it.”

With new shocks, springs, and bushings, Hammond says that the mechanical potions of the restoration are almost complete but that there are still some final touches to be wrapped up over the course of the next three weeks. 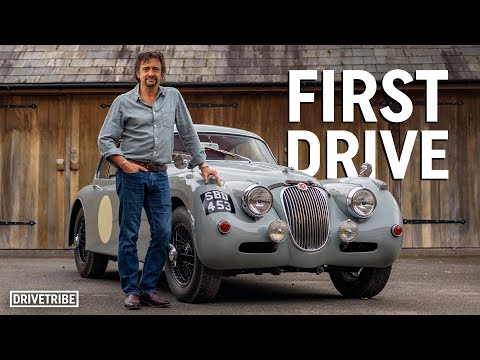