For nearly a decade, the old Top Gear crew made fun of Richard Hammond's passion for American muscle cars. However, he is still deeply in love with his ponies and has driven a classic 1967 Mustang Fastback on the way to test a brand new Mustang Mach 1.
11 photos

Usually, we don't get to see what car reviewers drive on the way to an event. But Hammond's deep connection with his classic slice of American pie makes this one of the most emotionally charged Mach 1 reviews. It's also slightly ironic, considering the Mach 1 picks up where the Bullitt just left off.

Richard really knows what muscle cars are all about. There's no EcoBoost in his vocabulary... unless he's driving a Focus RS. Instead, the classic Mustang he's owned for about fifteen years is a 390 GT Fastback. That means a 6.4-liter V8 resides under the hood.

And while just a few months ago, he said it was a 1968 model, "the same year and model as the legendary Bullitt chase car," (see the second video) it's got the wrong side vents for that. Even so, Highland Green with silver stripes is a pretty cool combo. Almost a Bullitt is better than not a Bullitt at all.

The review itself uses a slightly goofy, but interesting concept. Several questions from Drivetribe readers are shown on screen and answered by Richard Hammond from behind the wheel. So even pretty average features like active exhaust and suspension can be highlighted and made to sound interesting. 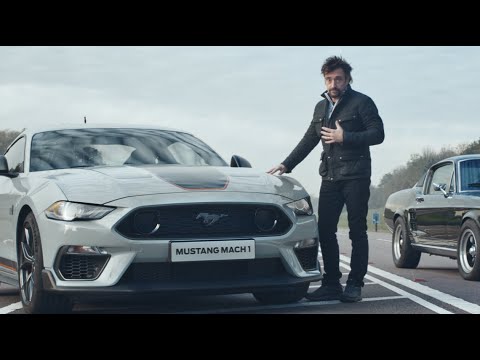