1 Tarquini, Priaulx Take Chaotic Wins at Marrakech
Up Next 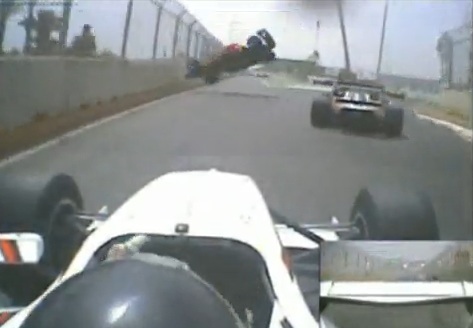 The Formula 2 championship almost went through another traumatic experience during last weekend's round at Marrakech – following the death of British teenager Henry Surtees at Brands Hatch last year – when Ricardo Teixeira's car made contact with another machine in a braking zone and became airborne in the process.

Teixeira had been involved in a race battle with Russian racer Ivan Samarin, which he tried to overtake on the long back straight. However, when approaching the first chicane at the end of the straight line, Samarin blocked Teixeira's way and braked hard, causing the latter to bump into his car and practically take off into the air.

The car eventually ended up into the concrete wall on the other side of the track, while spitting flames from its rear. Fortunately for the Portuguese Angolan driver, he was able to walk out of the machine practically unhurt.

“It was the first big crash I've ever had and it was very strange. I had a good exit and boosted, so I was catching a lot. I went to the middle and he moved to block, and then slowed. I just hit the back of his gearbox and went straight up,” said Teixeira in a post-crash interview with Autosport.

“At first all I was thinking was angry at him, then I realised I was up in the air and turning - when I looked down and thought 'I can see all the cars down there!' Then I saw where I was going to land and just crossed my arms for the hit, but it wasn't too bad.”

“It's a very strange feeling – it wasn't scared, everything goes very slow and it feels like it's not you, like you shouldn't be part of it. I was a little bit sore in my neck and shoulder but I am okay, there's no problem,” added Teixeira.

For the video coverage of the accident, click here.