With the normal order of things, the BMW-infused Mk V Toyota Supra shouldn’t stand a chance of beating a 2021 Acura NSX hybrid sports car. Yes, they have the same number of cylinders and just two doors, but the likeness ends there. But then again...
18 photos

We all know that when dealing with vehicles that were prepared for official quarter mile skirmishes the stock(ish) looks can be deceiving. Here we have a black Toyota Supra and a white 2021 Acura NSX and anyone could imagine they just decided to showcase the ancient Chinese philosophy of Yin and Yang, JDM style. But this dispute is far from being on an ethereal level. Quite the opposite.

Instead, it’s very much physical and totally drag-strip-ready. So, logically, we could choose from the start the victor in a heartbeat. This is because the hybridized mid-engine Acura NSX usually brings to the table almost 600 horsepower and a balanced stance that makes it shoot straight down the quarter mile like a precision missile. Instead, the Toyota Supra is a largely traditional example of the front-engine, rear-wheel-drive sports car breed.

And it’s massively underpowered in stock form. This is because the darling of the JDM world now has Bavarian genes, which include a 3.0-liter straight-six mill that’s only good for up to 335 horsepower in the top configuration. But, as one may clearly see from the sketchy solo run at the 1:12 mark, this isn’t a factory-bred Supra. Instead, it runs on an unidentified assortment of modifications that seem crazy enough to make this little coupe a handling monster (for the one at the wheel).

As such, a bevy of runs will attest that it’s now on par with the hybrid menace, much to the delight of the audience. The initial run got us thoroughly disappointed, as the NSX reconfirmed its lead in real life. And, unfortunately, we’re not being given any ET or trap speed details, so getting the winner signal will have to suffice.

Interestingly, this Supra vs NSX encounter also clearly calls for a rematch, maybe even of the grudge type. That’s because there are an additional three races (from the 2:16; 2:40; and 3:24 marks) to show this is perhaps just the start of a JDM-inspired turf war. And, in the end, after four races, each of the competitors managed to nail a couple of wins, so the question remains: “who came out on top?” 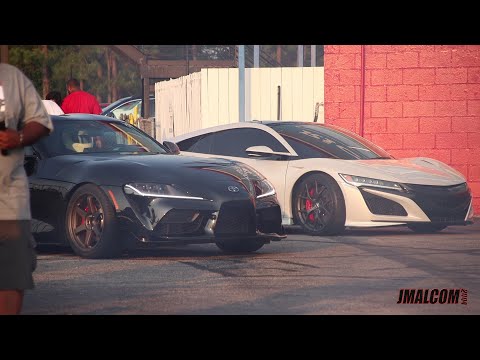