2 1969 Mercury Cougar Is a Crazy Widebody Eliminator Concept, Even if Only Digitally

4 Chevy Camaro Gets an Unofficial Facelift, See Anything Funny?

Today, the automotive industry is like one big (sometimes happy) family. Take Suzuki and Toyota for example, which eagerly share rebadging duties with the Baleno/Starlet, Brezza/ Urban Cruiser, and Vitara/Hyryder in certain developing countries. But how about something with a global appeal?
18 photos

We already know that is possible, given the European Suzuki Swace impersonation of the Toyota Corolla Estate. So, how about something with pedigree, massive appeal no matter the region, and the potential for unlimited fun? Well, if we are only speaking about virtual ideas, here is the pixel master better known as Theottle on social media, who has decided to tempt our imagination with the illogical assumption that Toyota has adopted Suzuki’s Jimny.

That is right, and there is also a cooler catch than just a simple rebadge, even if it is merely wishful thinking. So, considering all those aforementioned siblings, the virtual artist went even further down the dimensional scale and asked the pocket-sized CGI-million-dollar question: “will there be a Toyota version of the Suzuki Jimny too?” And, of course, the digital content creator also found the perfect candidate for the transplant: a revival of the 1980 to 1990 Toyota Blizzard.

While the original was based on two Datsun models – Taft for the LD10 initial iteration and Rugger for the LD20 second-generation follow-up, this time around Toyota’s Blizzard would adopt the iconic allure and simple off-road-focused architecture of Suzuki’s Jimny, albeit with a digital twist. So, just to make sure the Toyota resurrection of the Blizzard nameplate does not get discarded as mere lazy Jimny rebadging, the artist also “paired (it) with the front fascia of a Toyota Compact Cruiser EV” concept.

Interestingly, the boxy allure of the prototype works like wonders on the tough little Jimny. Thus, we might consider this an incredibly positive idea. However, there is just one mystery – will the face swap remain just a plain design transplant or would Toyota be willing to also adapt its EV technology to make it future-proof? 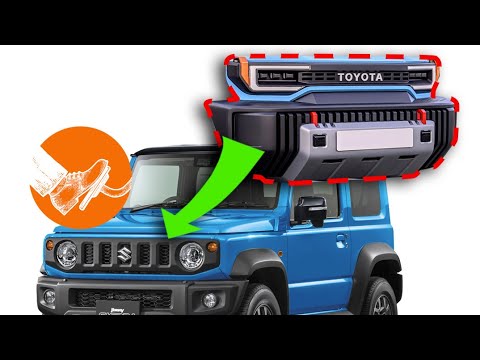