1 Nissan Skyline '2000' GT-R Morphs Into Perfect Surfer Hauler, Albeit Only in CGI

Unlike Toyota and BMW’s Austrian Z4 and GR Supra endeavors, other Japanese automakers are trying to keep most collaborations in the JDM family. A case in point here would be the recent, fruitful Mazda - Isuzu relationship.
16 photos

And, of course, everyone tries to take advantage. Including virtual automotive artists, who are always exploring new ways of expanding such corporate “love affairs.” By the way, Mazda just announced the initial specifications of its e-SkyActiv D engine, their first inline-six diesel mill, and one that will be proudly flaunted under the hood of the CX-60 mid-size crossover SUV.

Thus, it is only appropriate that the virtual artist better known as Theottle on social media has decided to tempt our imagination with the logical assumption that Isuzu will expand its Mazda partnership. In case you were not aware of their cost-sharing shenanigans, the third-generation D-Max mid-size pickup truck has also been used as the base for the creation and development of the third-generation BT-50 rival.

And the pixel master seems to love this corporate love affair because he recently thought about mutating the BT-50 truck into a hulking body-on-frame “CX-90” sport utility vehicle that would piggyback on some virtual DNA from the Isuzu MU-X. But that does not mean he stopped there. So, embedded below is the behind-the-scenes creation of a flipped scenario, where Isuzu borrows a Mazda base and then sprinkles over it some corporate design DNA.

The case is quite logical, as the CGI expert wanted to second the tough Isuzu MU-X off-roader with a ritzy mid-size crossover SUV and thus chose to mix the Mazda CX-60 with it and achieve an unofficial, potential Isuzu Axiom reinvention. Interestingly, the quick rebadge and remix does not look half bad and could have some cool potential for Isuzu in markets where the Mazda sibling is not present. 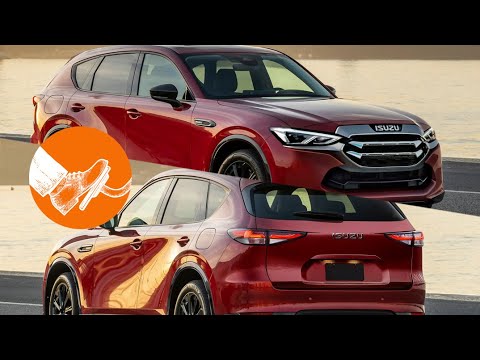