1 Up Close and Personal With the VinFast Lineup at the 2022 New York Auto Show, Lots to Like

2 VinFast Reveals Prices for the U.S., Europe, and a Mysterious Battery Subscription Plan

4 VinFast Will Make Its Electric Cars in North Carolina, Create 7,500 Jobs There

5 A Simple Aspect That Many Ignore Can Hinder the Success of Any Vehicle
Car video reviews:
Up Next

VinFast, the Vietnamese brand that has signed a contract to be able to build a factory in the USA so that it can manufacture EVs there, has begun lending out some of its vehicles for reviews. Just three months ago, the vehicle was just revealed, and now we are starting to see presentations of it in the open. More are set to follow.
10 photos

As you might have noticed, some of our colleagues have gone to the 2022 New York Auto Show, where the VF8, along with other VinFast vehicles, was exhibited, and we got up close and personal with it.

Days later, the famous YouTuber known as Supercar Blondie published a review of the VF8, which is an all-electric SUV that starts at about $41,000 in the USA. It has a couple of interesting features, especially at this price point.

While some of them were already known, mostly from the company's press releases, as well as various reports about it, there are things that need to be reviewed or pointed out in a review to really bring to light.

For example, VinFast has integrated what many may describe as a smart voice assistant, and the latter displays the commands that it understood from the driver on the central screen. The latter acts both as a dashboard and as an infotainment unit. The climate controls are also on the screen but are always displayed, or at least that is what they seem to be.

The vehicle in question is a pre-production prototype, which means that some odds and ends are not as they are supposed to be. For example, the caps on the charging point are not attached to the body, so the user must take them out and place them somewhere when they charge the vehicle, which is inconvenient.

Interestingly, VinFast has had the inspiration to still feature a rotary volume knob, as Alex Hirschi notes, which is something that many people will probably appreciate in their new EV. Mind you, this review does have a “sponsored” hashtag next to it, so not everything is peachy, but it does have a couple of promising things. 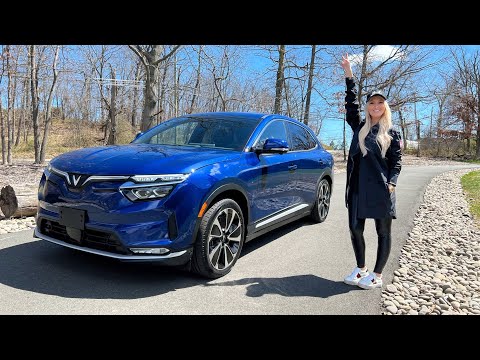