Up until now, North Americans could only look in envy at the Europeans who were enjoying their Volkswagen ID.3s, the all-electric hatchback from the German manufacturer that's supposed to be as pivotal for the company as the Beetle and the Golf were before it.
80 photos

Being restricted solely to the European market, the only way you could get an ID.3 in the U.S. was if you managed to buy it in one of the European countries where it's available, have it shipped over the pond (probably across the country as well since you'd most likely be living in California if you could even contemplate doing something like this), and hope nothing would break because even you could get a Volkswagen service center to look at it, getting parts would probably take ages. Still, you'd be driving the only ID.3 in the country, so well worth the hassle.

The more intelligent alternative would have been to place an early order for the ID.4 electric crossover instead and wait until Volkswagen would commence deliveries for the NA region. It may not look quite as funky as the ID.3, but at least it's more practical thanks to its larger size and, more importantly, it comes with full support from Volkswagen of America.

The company has placed a very big burden on this model, which is the first VW EV of the new era available globally so, therefore, the expectations were also pretty high. Nobody expected it to beat Tesla in terms of maximum range or performance, but they did hope it would provide an alternative. A sensible, well-made German alternative.

This review, carried out by the Canadians (well, James is technically British, but he seems to have chosen Canada) from Throttle House, goes to great length to make it very clear the Volkswagen ID.4 is not a bad EV. It's not even a bad car. Sure, it may look a little bland (particularly in the black paint the test vehicle came in), with the two going as far as to quote the "anonymous-looking" description they heard, but it rides well, it's comfortable, and has all the power you could ever need in a daily driver.

So, then, what's the ID.4's problem? Well, while everyone feared VW would bottle it due to insufficient range or power, the Germans somehow seem to have forgotten how to do the things they've been getting right for years and years. All people wanted from this EV was a regular, no-frills car with impeccable build quality - in other words, Volkswagen's tried-and-tested recipe that's made the Golf such a huge success.

Instead, the manufacturer tried to look cooler than it actually is, and it overcomplicated a few things it really shouldn't have. It's nothing vital so it shouldn't affect the model's sales, but you can't help feeling that it could have been so much better. And then there's the whole Ford Mustang Mach-E situation, which could potentially be pretty bad for the ID.4. 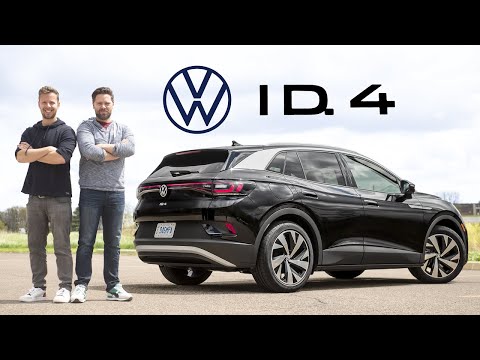