4 There Are Some Strange Noises Coming From the EQS, and You Might Want to Hear Them

Review Says Mercedes-Benz EQS "Will Make You Puke," But for All the Right Reasons

You don't have to be new to cars to call the Mercedes-Benz EQS a "spaceship," and you don't really need to spend that much time with it to come to this conclusion.
7 photos

The German electric sedan (I'd call it a "limousine,” but I feel like it still needs to grow a little before I can do that) ticks all the right boxes to warrant the flattering comparison. For one thing, it has a sci-fi design. Alright, it's nowhere near as envelope-pushing as the Tesla Cybertruck, for instance, but it's not exactly entirely conventional either. Like the electric pickup truck that continues to elude its buyers, the EQS' appearance has also split the public opinion in two: one side thinks it's ugly while the other likes its other features so much it's willing to ignore the exterior design.

To be fair, that might very well be the only thing the EQS is missing, and since once you buy it, you tend to look at it from the inside out rather than the other way around (for the most part), it's completely understandable why people would be willing to give the German EV a shot.

Sarah, of the Sarah -n- Tuned YouTube channel fame, seems to agree. In fact, she goes the polite way about it and makes no comment whatsoever on the exterior design of the EQS. Maybe that's because she knows this type of thing is entirely subjective, but the more likely explanation is that when you like something - and she definitely liked the Merc - you tend to focus on the positives and just ignore everything else.

Besides, she's a mechanical nerd, so she's more likely to get overly excited by the thickness of the anti-sway bar or the size of a brake caliper than some fancy body styling anyway. That being said, she does seem to appreciate the interior design, which instantly makes her a fine art connoisseur because that's precisely what the cabin is: a work of art.

She appears to be particularly mesmerized by the Hyperscreen, the continuous piece of glass that makes the three large digital displays seem like one continuous, swooping, huge screen. I totally get it, and you can feel the quality of the materials and the execution just by looking at this video, but I would have still preferred some physical buttons - even if that meant ruining the clean look.

Sarah also enjoys the artificial sounds way more than I think it's healthy. Hearing the car going all Star Trekky whenever you hit the accelerator might be fun for a day or two, but I will guarantee you that every owner who can make their way around the menu will have those switched off in no more than a week.

The 516 hp of the EQS sounds impressive, especially when you consider they come from a dual-motor (and hence AWD) electric vehicle, but then you remember the Model S Plaid has nearly double that. Judging by how impressed Sarah is by the EQS 580 4MATIC's performance, I'm willing to guess she is yet to drive a Tesla. What can you do, not all YouTubers live in SoCal?

Experiencing that is definitely going to change her perception of what performance in an EV can feel like, even if the comfort levels will be on opposite planets given the Merc's soft pillows integrated into the headrests. One aspect where the Model S is guaranteed to fall short compared to the EQS is braking - though she does say the stopping power displayed by the German sedan makes her puke, so the less violent approach of the U.S. model might not go underappreciated.

However, mentioning Tesla's name in the title of her video is done purely for views because, let's face it, the two models have nothing in common apart from both being BEV sedans. The Tesla smacks the EQS when it comes to all performance-related metrics, while the Mercedes-Benz makes the Model S feel like a cheap Chinese knockoff in terms of quality and luxury. Not exactly what you would call "direct competitors," is it? If you care to see what Sarah thinks, give the video below a crack. 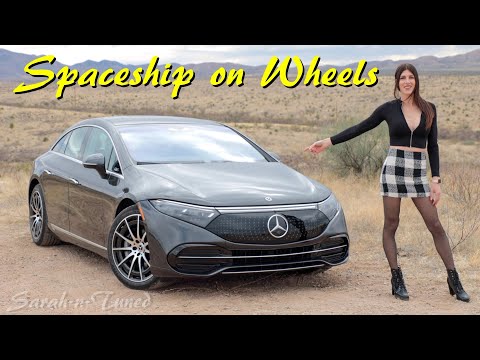