1 Trek's 920 Touring Machine Is No Longer Being Built, But Some May Still Be Hiding in Shops

2 Guy Reinvents the Wheel, Cuts It in Half to Make a Fully-Functional Bike

3 Insane Range for Low Bucks Is What the Commuter E-Bike From State Bicycle Co. Is All About

4 The ENGWE X26 e-Bike Is Big, Bold and Beastly, With Triple Suspension and 1000W Motor

Let's face it, when you look to buy a bicycle, you have to consider what sort of terrain you'll be using it on. After all, it's the main reason you don't see hardened riders bombing down mountain trails on beach cruisers.

However, if you're looking for a bicycle that covers as much ground as possible, be it shine, rain, or snow, the Revelstoke MTB is one machine you should consider. Maybe you don't feel that way just yet, so I beg you to finish this short article; you may just thank me after.

Now, the Revelstoke is a bike that's built by a crew dubbed Van Nicholas. Ever heard of this team? Most people haven't, and it's not because it's some small insignificant shop; it's due to the sort of bicycle they build. One reason Van Nicholas flies so low under the radar is that they dabble in designing and building machines out of nothing more than titanium.

If you're wondering why you should ever explore a titanium frame, know that some bicycles built from this metal happen to outlive their owners. This notion, however, also births the idea that this machine needs to keep you happy for that long. And how does all that happen? The same way it would in any relationship that involves love, as time goes on, you occasionally spice things up a bit.

But how the heck do you spice things up with a bike? The answer is actually quite simple. Remember, bicycles are typically built for a particular type of terrain, thus dictating the sort of gear you can drop on the sucker. With that, imagine a two-wheeler(the Revelstoke) that allows you to adapt your tires to the terrain you'll be tackling that day. That's what we have here.
Simply put, the Revelstoke's ability to adapt to an array of surfaces lies in its ability to equip either 27.5-inch tires or 29-inch tires. Since the 27s allow for a tire cross-section of up to 3 inches, the Revelstoke should have no troubles trudging through snow-ridden roads and paths, as long as your legs can handle the workout.

Come summer, you can stick to the 27s, but you can also drop the cross-section size and be a bit more nimble on dirt paths and even roads. If you really need to cover ground or just want one hell of a singletrack experience, 29s are your best bet, and this puppy can handle that too.

Diving further into this MTB, something seems odd, at least judging by the way Van Nicholas presents it on the manufacturer's website; it's rocking a stiff front fork. Yes, but that doesn't mean the frame can't take a suspension fork; it can, up to 100 mm (3.94 in) of travel.

As if things weren't intriguing enough, there's a version of this bike with a lefty fork on it, and may I add that the one Van Nicholas has chosen makes the front of this bike look like the frame on a crane, the kind you'd find on a construction site, that heavy-duty stuff.

Regarding the sort of drivetrain you could find rocking your cycling experience, it's all up to you. But, Van Nicholas does lay a solid foundation for offering you as many options as possible. This simply means that as long as you stick to the BB and frame specs, you can rock a 1x or 2x drivetrain. Maybe you have a favorite system lying around the garage, maybe on your soon-to-be old bike.

At the end of the day, just a bare frame will run you around €2,100 ($2,200 at current exchange rates), and the cheapest full bike the configurator shows is priced at around €5,600 ($5,900). Sure, it may seem a bit more than we're used to paying for bikes, but considering the things this machine can achieve and how long you could end up owning it (20+ years), it's worth bringing it to your attention. But, do take the time to explore its capabilities in-depth as the Revelstoke isn't your typical bicycle. 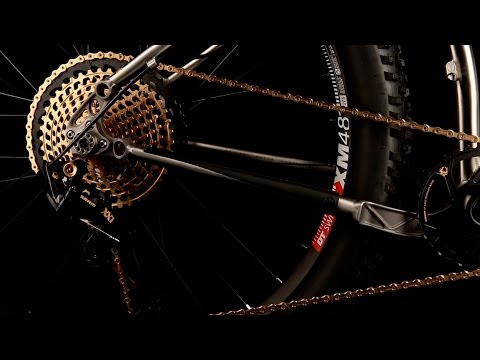 Editor's note: This article was not sponsored or supported by a third-party.
The image gallery displays an array of Revelstoke builds.