5 Suicide-Door 1985 Ford F-150 Runs Everything Backwards, Including the Burnouts
Car video reviews:
Up Next

While one of the three available body styles of the original Ford Mustang is colloquially referred to as the Mustang Fastback, we should be calling it the SportsRoof according to the Blue Oval. But, in this particular case, it’s alright if you don’t want to use that moniker, Mach 1 will do just fine, or even better.
32 photos

Back in autumn 1970, the company was showcasing to the world the new and improved 1971 model year Mustang, which came with an increase in dimensions as well as a corporate blessing from the company’s equally brand-new president. That one was none other than Semon Emil “Bunkie” Knudsen, a prominent American automobile executive that’s best known (and sometimes criticized) for the aforementioned Mustang size increase and the prior General Motors stint.

If not for the decision, there wouldn’t have been the opportunity to discuss this silver with black stripes 1971 Ford Mustang Mach 1 seen here in the inventory of Garage Kept Motors. And we’re glad it exists, as Blue Oval classic car enthusiasts might want to take it into consideration now that a 2021 Ford Mustang Mach 1 is also around.

As far as the highlights are concerned, we could start by noting that we’re dealing with a restored example that’s fairly low in terms of mileage (35,538 miles/57,193 km), considering it’s been around for no less than half a century. Aside from the cool paint job and the appropriate 351 Ram Air or Mach 1 markings, the exterior is also very enticing, thanks to the barrage of scoops and aero elements, among others.

Moving inside, one will find a contrasting black vinyl upholstery, woodgrain inserts, a pair of bucket seats up front, along with neat little upgrades such as the SunPro tachometer, Jensen CD audio head unit, auxiliar gauges, or the T-shifter for the automatic gearbox.

Then, under the hood, the 351 Ram Air makes all kinds of nice 351ci (5.75L) Cleveland V8 noises, as heard during the walkaround provided in the video embedded below. That said, this would be the part where the conclusion includes a word or two about the listing price. Unfortunately, this time around, the dealership chose to have this in the “call for price” category. 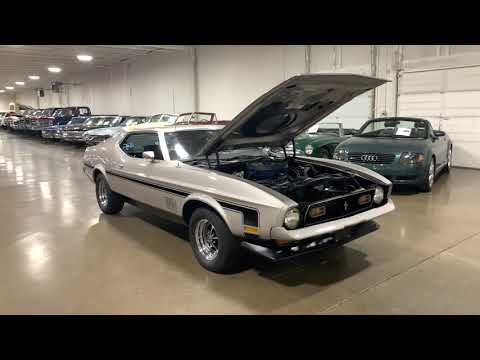