Congressman Proposes Taxes for Billionaires Who Fly to Space

The “Summer of ‘69” might be famous because of Bryan Adams and the countless love/coming of age stories that unfolded with the single in the background. But, for us, it’s all about the automotive wonders of the era. Such as this tastefully restored and smoothly upgraded 1969 Chevrolet C10 SWB. It looks pristine and costs a bit more than one would expect, but just seeing it and the imagination will start running rampant with plans for timeless summer road trips.
26 photos

General Motors nicknamed the second-generation Chevrolet C/K truck series (1967 - 1972) the “Action Line” and this unit clearly befits the designation. In more ways than it did back in 1969 when it left the factory gates. After all, these classic pickup trucks are a favorite of both the aftermarket sector and classic car fans when it comes to keeping them from turning obsolete.

As far as this particular C10 example is concerned, we dig the streamlined SWB look – which is sure to make it easier to stand out in the Stepside crowd. Even though it doesn’t sport a curious paintjob. Instead, the previous ownership went for a clean, all-black with contrasting chrome details look. And it’s clear that was the right call, so the C10 won’t jump in your face because of the design... but rather the performance.

The pristine looks showcased on consignment from Sherman, Texas-based PC Class Cars are due to a thorough restoration (which includes a spray-in bed liner). The high-performance hints, on the other hand, are all over the place. Keen observers will go past the 20-inch American Racing wheels shod in asymmetrical 255/295 rubber and signal the lowering kit, custom black interior with a tilt steering wheel column, as well as the dual exhaust setup.

And that’s not all, because the Chevrolet hides a cool 383ci stroker V8 engine surprise. The mill is mated to a Tremec five-speed manual box and other highlights include the March Performance serpentine belt system or the ceramic headers. Now, there’s just the case of paying the top $49,500 bill if one wants to make use of the bespoke bench seat and the Old Air Products A/C system during the summer’s road trips and work/fun adventures. 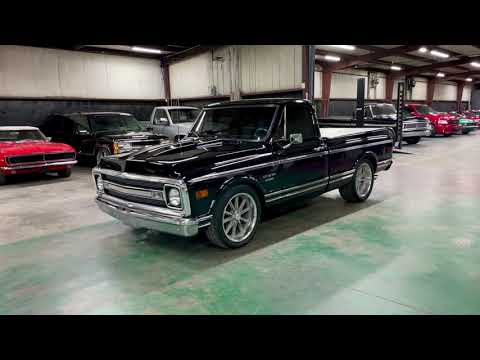