For the final year of the first-generation Camaro, the General Motors pony received some well-deserved muscle in the form of the COPO 427 big-block V8. Those who couldn’t order the gargantuan engine had to settle for the L78, which develops 375 gross horsepower from 6.5 liters of displacement.
15 photos

Of the 206,837 ponies that were produced that year, only 4,889 received the virtual twin of the big-block V8 in the second-gen Corvette. Some of this powerplant's secrets are the square-port heads with upsized valves, high-rise intake manifolds made from cast aluminum, 4150-series quad carburetor with 780 cfm, solid-lifter camshaft, and 11.5 compression ratio.

The Camaro SS offered by RK Motors Charlotte is pretty close to the original specification. Notable differences include the 4346-series carburetor with a four-barrel design and the COMP cam. Restored to very high standards, this blast from the past also features the correct four-speed manual transmission, 12-bolt axle, and F70-14 Goodyear Polyglas rubber shoes wrapped around steelies with stainless trim rings and SS center caps.

Finished in Fathom Green, augmented by a black vinyl top, and beautified by white-painted hockey sticks on the sides, the muscled-up machine boasts a satin-black rear valance and a polished rear bumper with the correct guards. A fresh booster for the braking system also needs to be mentioned, along with discs for the front axle and good ol’ drums out back. The aluminized exhaust and transverse muffler help the L78 sing the song of its people, and a Delco-topped battery complements the big radiator up front.

As far as the interior is concerned, the Camaro SS is rocking the period-correct black upholstery with the factory-issue accessory gauges. This beautiful F-body coupe keeps it classy with short buckets for the front occupants, a clean radio delete, an SS-branded steering wheel featuring a three-spoke design, and a Hurst polished shifter for the close-ratio gearbox.

“Immaculate” would be the appropriate word to describe this 396-powered muscle car, which is offered by RK Motors Charlotte for a cool $99,900. 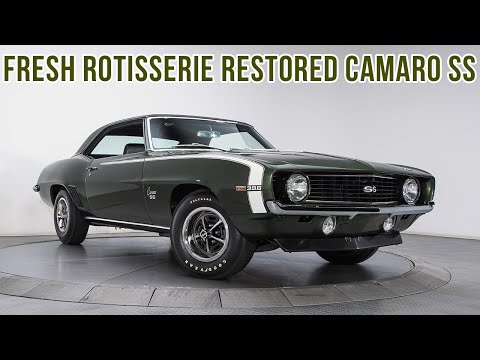