1 Pal-V Liberty “Flying Car” Nearing Production, to Have Parts Made of Composite Materials

5 Air One eVTOL Wants to Be Your Future Sportscar That Can Fly
Car video reviews:
Coverstory

Renault Unveils the Flying Version of Its 4L, Claiming the Air As the Road of the Future

Renault 4 is 60 years old and nothing says better “Happy Birthday!” than a flying version of the car that sold in more than eight million units all over the world. Renault and design hub TheArsenale teamed up to show us how they imagine the R4 would look like in 60 more years.
6 photos

The AIR4 is described by its makers as a reinterpretation of the 4L that can fly and it was born out of the realization that down here the traffic is growing, while the world above us is still unhampered, offering endless opportunities.

It is made entirely of carbon fiber and, in terms of design, it follows the same lines and shapes as the car that inspired it, but it is adapted for the sky, accommodating concepts as thrust and lift.

Engineered and assembled entirely in France, the flying car has four two-blade propellers instead of wheels, with the access of the driver into the cabin of the AIR4 being made by lifting the front-hinged shell. The propellers can generate 95 kg (209 lb) of vertical thrust each, which means a total of 380 kg (837 lb).

Next on the agenda after the digital presentation of the AIR4 flying car is for the vehicle to go on public display for the whole world to admire. Visitors will be able to see it showcased starting next Monday, in the center of Paris, at the Atelier Renault on the Champs Elysees. The AIR4 will stay there until the end of this year. Then, in 2022, it will travel to Miami and New York. 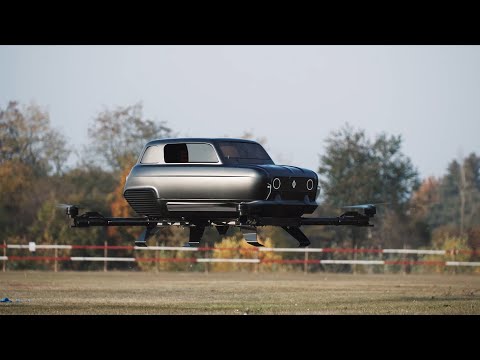