3 Renault Retires the Kadjar Nameplate, Next Compact SUV Will Be Named Austral Instead

Renault has unveiled a sketch of the interior of its upcoming SUV, the Austral. Meant to replace the Kadjar, the Austral will be revealed later, and it comes with the company's new vision of a vehicle interior.
7 photos

The new interior concept is based around the OpenR technology, which was revealed earlier this year for the new Megane E-Tech Electric. The idea is that the new OpenR Link interface is that it runs on the Android OS, which features Google's ecosystem, not just Android Auto capability. Worry not, Apple users, as it still integrates Apple CarPlay connectivity.

With the use of Google's OS technology on the OpenR Link interface, Renault claims that 90 percent of the features that are used every day are one or two clicks (taps, to be precise) away. In other words, only the bare minimum number of buttons will remain in the cockpit.

The multimedia unit will have a portrait orientation instead of a landscape one, which is a decision that several brands have gone ahead and made, while others went for a more traditional arrangement.

The French marque claims that the all-new Austral comes with traditional SUV hallmarks for its interior, but is also modular and has a "cocoon effect.” In the view of the manufacturer, the cocoon effect means more comfortable seats, as well as modular configurations that allow a more practical view of an automotive interior.

For now, we only have a single sketch of the interior, which is centered on two displays, one for the gauges, another for the multimedia unit. Together, Renault says that they offer 24.3 inches of display space or 774 square centimeters.

The French marque's representatives have noted that the anti-glare screen used for the gauge cluster is enough to remove the need for the visor over the dashboard. We cannot wait to test that out in real life.

As you will observe, Renault has also gone for a design that allows personalization, as the surfaces seen in red (with a pink hue to our eyes), may be available as colored ornaments that can be configured according to owner preference, and we also spot a set of lighting elements that could change how those ornaments will look.

It is important to note that this is just a sketch, and the production model may ditch some elements as it moves closer to getting the green light from the company's management team.

We do like the look of the steering wheel, which will probably not be retained for the volume model, but the same of the gear selector may stick, as well the screens, but possibly not the vents between them, though. 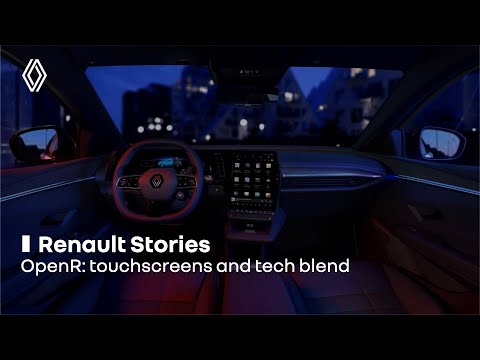