1 Renault Megane E-Tech Gets the RS Treatment, Wants a Piece of the EV Sporty Crossover Pie

Sergiu Tudose
If you live in Europe or have traveled to Europe many times, you’re undoubtedly familiar with the Renault Scenic. It burst onto the scene in the mid-90s, before winning the European Car of the Year award in 1997 as a super practical compact multi-purpose vehicle, or MPV.
32 photos

Think of an MPV as you would a minivan, only smaller and less cumbersome. This used to be a wildly popular body style, targeting buyers with medium to large families. It would have been all the car you need, capable of handling some of Europe’s narrowest streets, as well as any road trip you might have thrown its way.

There have so far been four generations of the Scenic (if we count the Megane Scenic) and three of the Grand Scenic, with this upcoming new model set to claim fifth-gen status sometime in 2024.

The French carmaker revealed a concept vehicle, dubbed the Scenic Vision, back in May of this year, and it was of course fully electric (kind of).

As for the show car, it’s been fitted with a 215 hp electric motor, a 40-kWh recyclable battery, plus a 15-kW hydrogen fuel cell. This is a one-of-a-kind electric/hydrogen hybrid propulsion system, but it’s a little soon to tell whether it will make it into the production version or not – this platform is currently in the prototype testing phase at the company’s innovation labs.

Anyway, with the help of hydrogen power, the Scenic Vision concept could, at least on paper, travel 497 miles (800 km) before needing more “juice”.

Visually, the show car they just brought to the 2022 Paris Motor Show is even better looking than the one in the initial press release. It’s matte white with carbon fiber accents and some additional glossy black trim for the roof pillars.

The interior is the same though, but that’s not to say that it’s not spectacular. Just don’t expect to see the production variant rocking any door-mounted displays and whatnot. 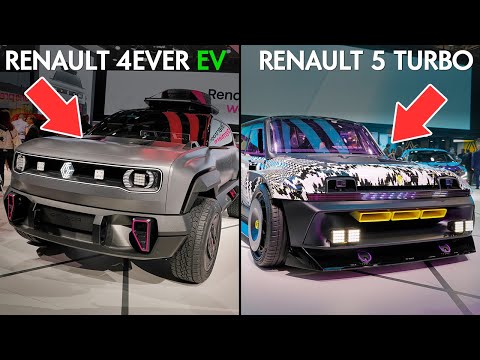